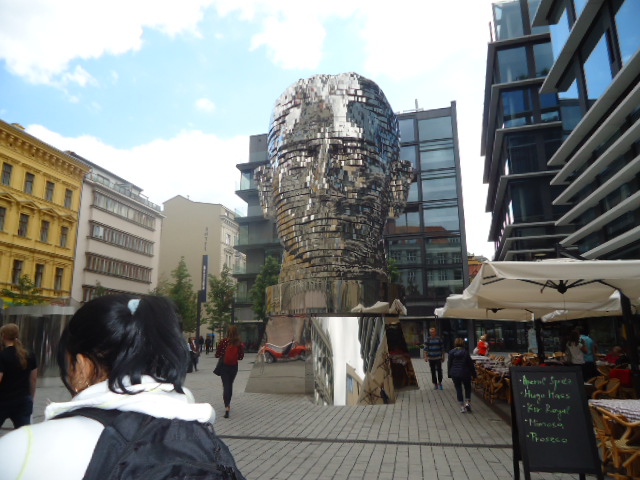 Dora Leonor Mesa, 2 May 2016 — Some years ago I referred to how well Vaclav Havel knew the Cubans. I never imagined that one day I would travel to the capital of the Czech Republic: Prague, the city of 100 towers. My husband always spoke to me with nostalgia for that city which he visited several times during his years as an athlete on the Cuban gymnastics team.

In 2015 I discovered Prague when I went as a delegate to the Forum 2000, an exceptional event dedicated to education and democracy. As scheduled, keeping my promise to the Infant of Prague was among my priorities, and I attended a Mass in his church. Some time ago I wrote a book of poems dedicated to the Infant of Prague that may someday be published.

The Moldava River is known through the famous Czech composer, Smetana. Kafka’s house formed part of my obligations as a visitor. I live and was born in Cuba, converted in mid-century into an authentic reality show of the famous writer’s work.

I spent 10 very busy days, in which I savored Czech, Hindu and Japanese cuisine (sushi, at last!). I’m not used to drinking beer. Also, it’s expensive in Cuba (at least $1.00 for 330 ml). Sometimes we can’t even pay for our daily food.

Imagine a common Cuban family buying alcoholic beverages! Confidentially, I can say that I always thought the popularity of Czech beer was an exaggeration of alcoholics.

Previously, I had drunk beer in Germany, where the excellence of the beer is part of the national culture. In Prague, almost by chance, I tried a glass of beer. Later I surprised myself by drinking it fearlessly with meals. A gigantic pitcher, one liter or more.

So when I attend some activity or event, no matter where, and I’m offered beer, I try to verify, discreetly, its provenance.

God forgive me if in Cuba I give myself the luxury of wanting to drink only the Cacique and Obama brands. To clarify, Obama beer is really called “President.” There is still no explanation for why the Cuban people changed the name, long before there was talk about Barack Obama’s visit to the island.

To conclude, and seriously analyzing my actual disdain for beer that isn’t Czech, I believe that the Czechs use magic formulas to convert those who drink it into loyal experts. Something like a vaccination against beers that have no class.

At least for me, Prague isn’t only a symbol of marvelous glassware, good clothing and democracy. I now also imagine, with pleasure:

Being in Cuba with a pitcher full of Czech beer!

Translated by Anonymous and Regina Anavy