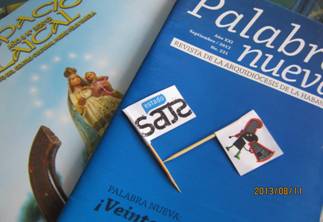 For some time there has been a consolidation of some of the spaces for  analysis and discussion of issues that directly affect society: Critical Space; the magazine’s Temas’ Last Thursday; Dialogue in the Cuban Pavilion; the meetings of the magazines Lay Space and New Word; the independent Estado de SATS project and others.

They range from those closest to the government positions, to some that occupy intermediate positions, and to those the furthest away. It’s true that they are still few and some, in order to meet, must overcome many obstacles, and even confront the misunderstanding and fear of many, and the veiled or overt repression from the authorities, according to the current political temperature.

Usually they arrange a panel and guests specialized in the subject to be discussed, along with the participation of interested citizens. After expositions by the main speakers and discussion of those among different specialists, with the help of a moderator, they are opened to audience participation, usually managing to achieve a constructive and positive environment, in the context of differences in points of view. Some, without public participation, such as Citizen Reasons, have a panel of experts who analyze and discuss the topic in question, with the help of a moderator, which is then edited, reproduced and distributed on CD.

Conspiring against these spaces are two factors: one of a material nature and one of a political nature. The first is a given, because the sites involved, as a rule, are small and do not allow the presence of large numbers of people. Thus, their real influence is rather limited, but then try to disseminate the analysis and debate through different media (written text, email, USB, CD, etc.). Conspiring against the latter are the limited economic options.

The second is a given, first, because the government officials invited, regardless of their positions, have never been present in any of the spaces. Because of this, all that is analyzed and discussed is done so the context of the opinions of those with no real power, and without direct confrontation with the holders of authority and resources.

This brings immediate consequence, that the results are not known to the authorities concerned and, if they become so, it is only through a third party, often in an incomplete or distorted way, depending on their interests.

Unfortunately the authorities, rather than take advantage of these practices of civil society to support good governance, cling to the false and failed method of making different policies in closed compartments by think tanks, to later be approved higher up, and then sending them down (the word says it all) to the base for analysis and discussion, in order to give a veneer of democracy.

It’s no secret that at the base level the analysis and discussion are superficial and formal, and whatever is proposed is quickly approved to be done with it, as everyone is more concerned about the immediate problems of daily survival.

Anyway, it’s healthy to maintain, develop and expand these spaces, despite their limitations. Perhaps, when the participation of citizens is increased, and gains still more in seriousness and prestige, government representatives will have no choice but to someday accept the occasional invitation and participate, duly authorized by their superiors. This would be a sign that dialogue is possible.