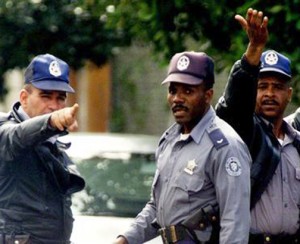 Monday, October 14th, 2013 | By Miriam Celaya, www.cubanet.org — If there is something in the past 55 or so years in which Cuban regime has been efficient it’s in the administration of news according to its own interests, a trick that consists in covering with words several printed pages and all the “news” media, without actually saying anything. Or another variant, not less crafty, which consists in launching information that they know will cause expectations and agitation in the public’s opinion, and then placing another, more significant story, though at first glance it may not seem so, and then it can pass virtually unnoticed.

Such was the case of a convoluted news story published in the newspaper Granma last October 3rd, 2013 (“They Explain Changes in Criminal Legislature”, front page), at a time when the announcement of the ban on the sale of imported clothing to the self-employed and their seizure by the authorities was capturing all of the attention of public opinion. In fact, there has been no reaction of opinion on the subject of the legislature, though they complement the recent official measures against the self-employed. 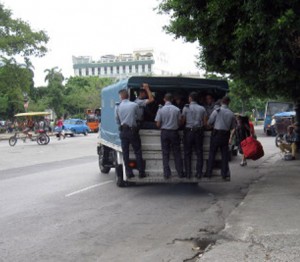 The preliminary survey revealed that the amendments to the Criminal Code and the Criminal Procedure Act do not seem to have aroused the people’s interest. However, they legitimize the atmosphere of impunity that characterizes the relationship between the repressive forces and the population. With the Decree-Law 310/2013 “the powers of the municipal courts are extended to adjudicate offenses punishable to up to eight years’ imprisonment” (previously it was up to three years), while “the acting authorities, such as the Revolutionary National Police and others have other jurisdictions, so they don’t necessarily have to send all cases to the tribunals”. The police force –that niche of uniformed filibusters- will be both guardian, captor, judge and executioner of citizens

Another newly introduced amendment in the law is Decree 313/2013 of the Council of Ministers, which states “in which cases goods associated with a crime should be seized, and what entities should be in charge of the property directly related to a crime and what entities should be responsible for their acceptance or for securing them…” Items thus confiscated “could be marketed immediately and contribute to the state budget” and if “it is decided to return the goods” to an individual and the goods have already been marketed, the individual will be given goods of “similar characteristics” or he will be compensated financially.  That is, the authorities will have the prerogative to establish the legitimacy or lack thereof of people’s assets and of what rights they may or may not have over the goods; the assumption of the power to sell particular properties to the State and the decision to determine in what cases property will be returned to citizens and at what values if they are to be compensated, all, of course, at the discretion of the same authorities. 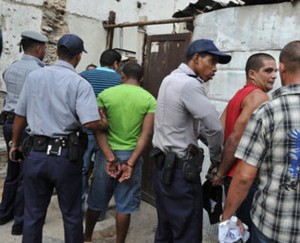 It is scary to think what levels of helplessness the common Cuban has reached, with the increases in the power of the PNR and the courts, that is, the repressive institutions at the service of the government. All this in a scenario marked by corruption at all levels, and particularly among the agents of “order”, in theory responsible for ensuring the public peace. I cannot think of anything more absurd of this government than to try to maintain social control by empowering an army of semi-illiterate corrupts supported by law professionals, as if this way the chaos that is upon us could be avoided.

A few years ago, the General-President, whom some optimists considered a reformist pragmatist, announced that the measures to “renew the model” would not be retracted. He lied, but perhaps the original intention was truthful. The reality, however, showed that even the slightest chance for prosperity and economic independence goes beyond official controls and a totalitarian system cannot survive a reform process, however tentative and insufficient they may be.

The recent amendments introduced to the Criminal Code and the Criminal Procedure Act are an attempt, as useless and it is desperate, to put the genie back in the bottle. A twist of the screw so unfortunate that it will heighten the shift toward the worst case scenario: more corruption and repression against people increasingly unhappy and frustrated, just the least prone components to the control and order which the Cuban authorities are pursuing.