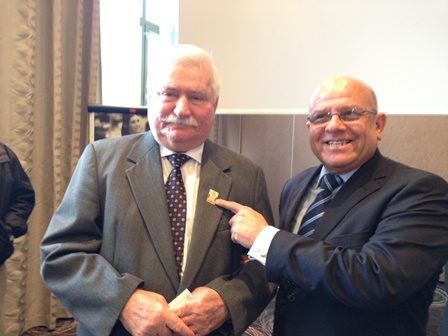 A year ago I was able to realize one of my lifelong dreams: to visit Poland, a country that remained loyal to its faith and liberty. This past October 20, I had the honor and joy of my second encounter with President Lech Walesa. Just before midday, we arrived at the Warsaw Hotel following a fruitful and cordial meeting with Poland’s vice minister of foreign relations, Mr. Leszek Soczewica.  There we learned that solidarity does not necessarily have to be at odds with an ethical pragmatism.

President Walesa, energetic and affectionate in manner, arrived with quick greetings for everyone, then took his seat to address some urgent words of attention to Cuba and conveying a transcendent message of affection and exhortation toward courageous and responsible action. 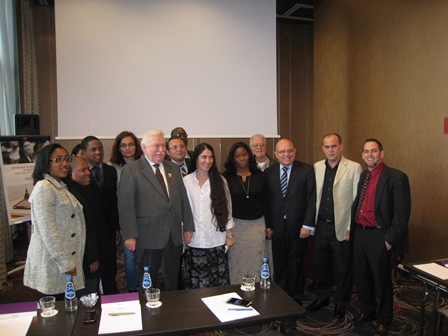 Upon concluding his wise words, he expressed his desire to listen to us to better learn first-hand the actual reality of the Cuban people. Various of those present were able to express our concerns for Cuba and we asked him to support the four points of consensus identified and claimed by a growing and significant civil society group in Cuba. President Walesa expressed his support for the four points and encouraged us to strengthen the structure of civil society.

Others also presented their projects and agendas. The wife of Mr. Manuel Cuesta Morúa asked Walesa to support and request the total liberation and exoneration from charges of her husband. She received backing for her cause from the leader of Solidarity and his countrymen. Mr. Walesa expressed, with fervent devotion to Cuba, that he concurred with the four points and also that he desired to travel to Cuba when conditions were right for him to do so.

Each participant was able to have his or her picture taken with President Lech Walesa, grateful for his time and commitment to Cuba.