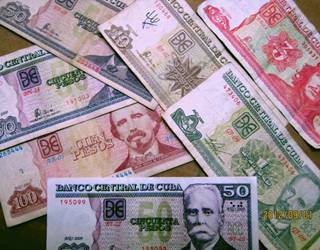 The Society of Cuban Musical Artists (ACDAM) is failing to fulfill its primary reason for being, which is to pay artists who belong to the organization in a timely and appropriate manner.

Over the course of a year, as I have been told by one of those affected, they have only been paid for the first trimester. Payment is made in the so-called “national currency”—those pesos that make up salaries and pensions and that cover only very few expenses. The other currency is commonly known as the chavito or CUC (and formally, the Cuban Convertible Peso). While both are national currencies, the latter is more difficult to acquire and the only one that can be used to buy essential goods in state-run hard currency stores— the only places to find certain everyday consumer items, which are sold at highly inflated prices.

As justification for this failure the ACDAM alleges that ARTEX (Artistic and Literary Promotions Management) has not yet settled accounts with them. In other words, the old “run-around.” This money, however, has now been in state coffers for a while and not in the pockets of the people who are supposed to be paid for their work. A swift solution to this problem is imperative since in many cases the payments are the only means of support for these Cuban artists’ families. It is not acceptable to keep “playing with funny money.” This situation, and others like it, suggest the country is dealing with a serious lack of liquidity.