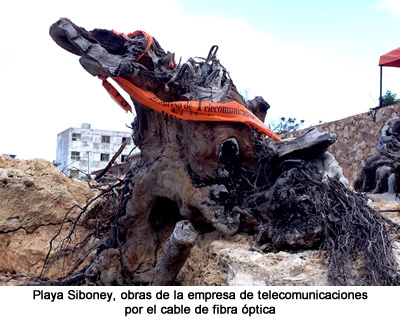 The residents of Siboney have reasons to be sad and upset, very upset. Hurricane Sandy devastated a good part of their coastal infrastructure, destroying houses, throwing up huge rocks on the shore, and seriously damaging the area’s vegetation. More than eight months after this hellish morning when the storm affected them, very little has been done by the State to reconstruct the place. Some locals have restores a part of the walls that surround their houses which the strong winds toppled. Although there are bulldozers and trucks carrying stones and dirt everywhere, they are not focused on once again raising the ruined village. They have, instead, a more pointed objective: the fiber optic cable that links this region of Cuba to Venezuela.

Several owners of private restaurants and rooms or houses for rent are complaining about the decline in international tourism after the debacle of Sandy. “The foreigners come with the idea of staying a week or more, but when they see the state of things these days they leave after two days… if they even stay that long.” the natural beauty of the place makes its current situation more dramatic. Facing a sea so blue it looks like a retouched postcard, many people try to make a living however they can. “But at least you will soon have the Internet, with the cable so close”… I provoke them, in search of information, as well. The reaction when the tendon that cost more than 70 million dollars is mentioned, comes loaded with pure skepticism. “With this cable they’ve protected even us!” says a lady with eyes almost the same color as the Caribbean, glancing about as she talks. 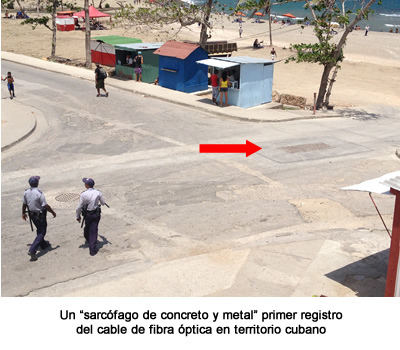 A  “coffin of concrete and metal” is the first place the fiber optic cable touches ground in Cuba.

The point where the so-called ALBA-1 touched land in 2011, shows no benefit of the data that circulates through it. A “sarcophagus” of concrete with a heavy metal cover, serves as the first “stop” of the cable that also links to neighboring Jamaica. A guard keeps his eyes on the place where so many kilobytes enter and leave. The irreverent hurricane from last October passed, ripping apart the previous box from where the end of the cable was guarded, leaving entirely open the framework fibers and its cover. The next morning after the incident, local residents looked out curious to see the place’s “new tenant.” Heavy equipment immediately appeared to recover it and make a small causeway under which it ran. After some weeks of work carried out by a brigade from ETECSA Telecommunications Company, the work is now in the hands of the Armed Forces (MINFAR).

As hope is the last thing to die, or so the older people there insist on recalling, the neighbors of Siboney are still waiting for the miracle of reconstruction and connectivity. “This could be the people with best Internet access in all of Cuba,” says a young man fishing from a cliff.” But I can not tell if he’s making a joke or is serious, as the harsh sun forces his face into a permanent grin. The truth is that this place still in ruins, could become more prosperous and have more opportunities to have access to the web.

Private businesses could attract more visitors with ads in cyberspace, they would have better information about upcoming weather patterns, and who knows, they might even launch a crowdfunding campaign to restore the nearby beach. But that’s a dream too far, I’m assured by an old man chewing tobacco and wearing an olive green cap that comes down over his ears.

Away from the beach… near the Internet

Less than ten miles from where the fiber optic cable made landfall is one of the Internet cafés in the city of Santiago de Cuba. The air-conditioned room with four computers and an attendant employed to watch what each user does in front of the screen. The stratospheric prices for most people (4.50 CUC for an hour), means there are no lines access the site. It’s time to do some testing on the connectivity and the sites allowed or not allowed.

Among the sites censored on this connection are Cubaencuentro, Cubanet and Revolico. Perhaps also other portals and sites are under the same “loop,” so it will be very useful for users to help rebuild the list of banned sites. 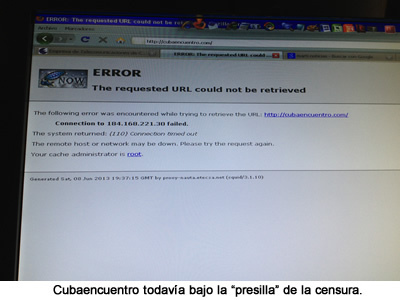 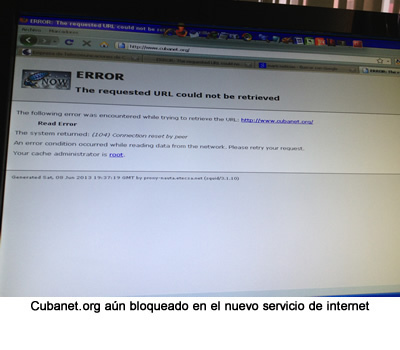 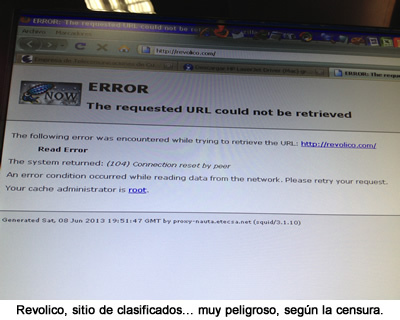 The good news is, sites that can be read without difficulty include:  Café Fuerte, Penultimos Días, Diario de Cuba and El País, as well as the sites of Amnesty International and Reporters Without Borders.

A speed test of the new connection, resulted in the data shown in the following image: 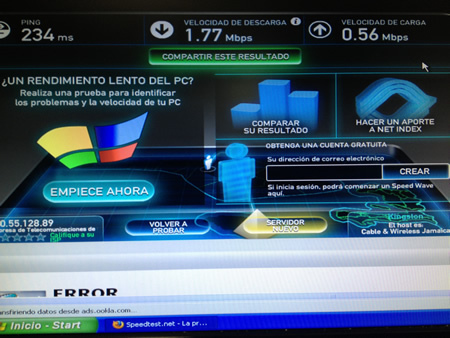 In summary, although this is not the Internet we dreamed of, given it high prices, censored sites and the inability to connect from home, at least it’s a crack that has opened the wall of disconnection. Now it is up to us to force this slit to become a door… may we live to see it.