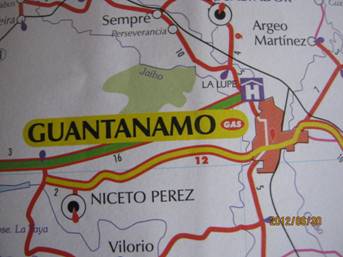 On the front page of the newspaper Juventud Rebelde (Rebel Youth), a review about Guantanamo on the 26th carries the suggestive title: “Revolution in the Plaza.” It reports about the work being done under pressure (as always) to ready the Mariana Grajales Plaza of the Revolution, where the national ceremony will be held this coming July 26th, celebrating the anniversary of the attack on the Moncada Barracks led by Fidel Castro in 1953, considered the starting point of the Revolution. The description is interesting because there is another reality behind it.

It’s a well-known and common practice of the authorities to build something and then to forget about it, fail to maintain it and let it self-destruct. With the plazas, as with everything else, the same thing happens. They build one in the capital city of each province, more as a reflection of totalitarianism than out of real need (they’re barely used and it might have been more beneficial to dedicate so many resources to repairing and building housing, to cite one example). The plazas languish for years until the day comes to use them. Then they rush around.

The case of Guantanamo is a good — negative — example. To make it usable, according to the newspaper, they are replacing all the woodwork of the underground rooms, fixing the bathrooms, changing the broken tiles, fixing the broken electrical system, and paving the streets around the site.

In addition, they are rejuvenating the indoor garden with ferns, planting hibiscus, red roses, oleanders and East Indian screw trees in the outside gardens, they are refurbishing the Friendship Forest with new trees and planting six palms to replace those that withered.

As if all this weren’t enough, there’s a new audio system, air conditioning for the meeting room, changes in the external lighting and a team of artists will be painting new murals in the themes touched on by the painter García Peña whose originals were destroyed by the damp.

As a citizen I have to ask myself: Why was all this allowed to deteriorate in this way? Why wasn’t it given proper maintenance every so often? Does there have to be some national event to fix it? And meanwhile, what is the purpose of these plazas that so many resources are spent on?

I don’t understand how, given the disastrous situation in the main plaza, obvious to everyone, Guantanamo was chosen as the site for the national celebration. I suppose there are other plazas in the same condition, waiting for the July 26th celebration to come to them. Meanwhile they continue to languish.

I don’t know why the mythic Spanish film “Welcome, Mister Marshall” comes to mind. It’s been years, when the initial enthusiasm still existed and the designation of the annual site awoke some interest, and at least the people appreciated it: in those days they increased the supply of products; something people hadn’t been able to buy for months would reappear, they sold more rum and bear, some national orchestra playing popular music would show up, they would renovate a few businesses, streets and parks, and the boring daily monotony would change a little. Today no one’s very interested, most people are bored by the annual repetition, without new material or spiritual offerings.

The title of the article is symptomatic: if there are things left to destroy, after having made a Revolution to rebuild them, they then are left to self-destruct again until the next Revolution. I prefer evolution from day to day, without these sudden leaps into the vacuum.