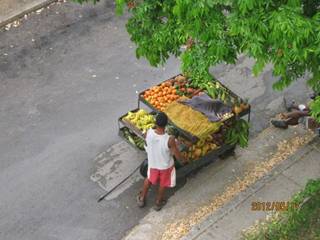 This time it’s not about a religious matter. Once again, the topic of food comes to occupy first place on the scale of priorities of the natives of my planet.

Despite the fact that the Eleventh Biennial is the great cultural event of the moment, the desperation over lack of food is leading to panic in the unhappy mothers and housewives who have the arduous mission of of putting at least one hot meal on the family table each day.

Yesterday a friend dropped by and suddenly gave an unexpected turn to the conversation by asking me: “You guys, how are you eating?” Clearly it took me by surprise just when we were talking about the Biennial.

This question, which to anyone might could have seemed a bit indiscreet, made sense to me; I understood her intention perfectly.

The neighborhood carts, that bring a variety of fruits and vegetables almost to the doors of the houses, a little more expensive than the supplies at the state farmers markets, but of excellent quality and nicely presented, have disappeared. I can think of one I happened to run into hiding under a tree. Even after having been authorized and paid for their licenses, they’ve been banned from this area (mostly residential), where it happens there are a lot of homes for rent to tourists and paladares – the private restaurants. The carts have been confined to offering their products only around the State markets.

This has made getting these products even more difficult, just when the supplies in the hard currency stores are facing their worst time. For some months these stores have lacked milk products, oil, meat, just to mention a some items.

On the other hand, the only butter available is imported, with an incredibly high price, such that almost no one is inclined to buy it. All this without mentioning the dark and dirty establishments where they offer the almost non-existent products of the infamous ration book.

All this, plus the inertia that has overtaken the regime, has put a yoke of despair on the spirit of the citizens. The government keeps talking about reforms, to be introduced over the long term bit by bit. They are entertaining us and trying to buy time, but every time we are left with less, and we keep on seeing, painfully, how our young people think of the possibility of abandoning the country as the only solution.

Meanwhile, we are becoming a society of old pilgrims.