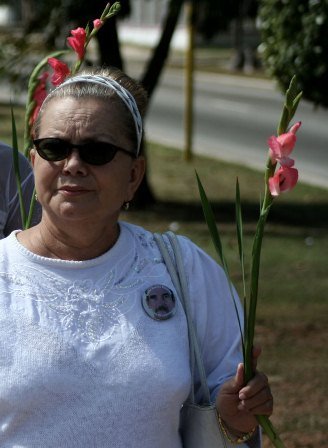 With the word one can create. I’ve always liked that idea.

If not now, then tomorrow. When the words have left only the ashes and letting go of them like the smoke of incense, they will change us. The ashes of Laura Pollán should have brought me her perfume. Laura means Freedom.

I once read that the truth is not in what we can say, but between the words we speak. They are the exceptions that tell the story. The empty space between words could be, in Cuba, what really keeps us prisoners. What is not said, that is different from: what can not be said. Because, for example: Saint Paul, “in the third heaven he heard inexpressible words that man is not permitted to utter.” But it is not that I am talking about.

In Cuba the majority of things that aren’t said could be said, at least those where nothing is gained by hiding them could be said. To express yourself freely is a crime. The State does not express itself freely, either. Even if it has given the impression of improvisation, what it really did about what it hides. Perhaps the most serious things in the history of these 53 years are still hidden under this enormous quantity of words, and they never let them be known. If it weren’t so tedious to reread the historical speeches we would see that between the words there are the most frightening statements.

If, in Cuba, you express your discontent, one of the most frequent expressions among Cubans is: “Fine, girl, go out in the street with a sign.” What this really means is, “Surrender.”  Because we all know that for 53 years this has been forbidden.

The main damage they have caused is wanting to turn us into the poor. But not only the materially poor, but the poor in conscience. Behind the exhortation “everyone go to the Plaza,” or “everyone vote for all,” we have been able to read the threat. We have been complicit in the violence exercised against each one of us.

Those who have found satisfaction in this process of social dehydration for the majority, are numerically very few. The rest have learned to read the threat between the lines.

Change occurs when we understand — in a moment of sudden clarity and of the return of our self-esteem, so opposed from the podium — that we must renounce the violence exercised against the real Cuban people, expressing ourselves. After coercion the only thing left is rising up. No one can truly prevent our personal rising up, as no one can make us go where we don’t want to go, because only if we project the quarrel do we win.

What the powers who are not us do is threaten us. From the moment we start to believe in ourselves, the threats become empty. Because whoever dares to mess with us will share our destiny, which God will write with tenderness somewhere.

I trust in the words that bring freedom, the words and the luminous abyss between them. Those who speak out to enlighten and not to hide, banishing that which contradicts our being human. Restoring to us all the riches that belong to us, especially the great love we have for each other as people, and then as Cubans.

From the moment in which we are invested with the power of faith we can counter any Pharaonic decree against us, which is the same as that against the Ladies in White of whom Cuba has not been worthy.

Because by pure faith they are fighting for us and for our families. I will never be able to thank Laura — because now she is in bliss — for that rainy afternoon in her house, in front of her ashes, without knowing how, I stood at her side there, where it is better, differentiating myself from those who probably killed her, she gave me her faith reborn from her ashes. As if to say to me: if you have faith you no longer need to be afraid.

She taught me that the faith I already have in my heart could carry me far and triumph over any dominion or power, because Christ has conquered death, and from the eternal Judgment of the Cross that saves believers, he has also judged and condemned to eternal death the people who took Laura’s husband and friends prisoner.

The same “people” who imprisoned the 75, also imprisoned with deception millions of souls for more than half a century, and it is our right to believe that we deserve to be free. Some day we will gain our freedom: Blessed are those who have not seen, yet have believed.