Last night, while waiting for the meteorologist who provides the weather on the National Television News, I heard the Appeal of General Castro to the people of Cuba to join the analysis of the Social and Economic Guidelines to be adopted at April 2011 Communist Party Congress.

I had forgotten about the One Party and its five-year congresses, but I remembered the Appeal in 1992, when they asked the people to offer their opinions, people said many things and the men in power turned the page. Once again, the same movie, like the “debate” from last year about raising the retirement age, and months later announcing the layoffs of a million workers, with the “approval” of the Party and the Workers Union which is controlled by it.

As it is not possible to understand the chronology of the absurdities and improvisations of those who run the country as if it were a cavalry regiment, I turned off the television and forgot about the weather. What’s the point of knowing about the rain, the cold or the cyclones, if it is the Palace gurus who unleash the hurricane?

I don’t think even in H.G. Welles, with his Time Machine, it would be possible to understand these broken gods who have lost their way, writing appeals and pulling out of their hats useless congresses to try to stitch together the torn national fabric. Of the Castro bulldogs would read The Invisible Man, The Food of the Gods, The Door in the Wall, and other works by Welles it might trigger their imagination and save us the little story of the Party’s role, its congresses, and its guidelines for governance.

Perhaps the Cuban general, like Welles with his fantasies, knows that dreams of domination have no basis in reality. The revolutionaries are not immortal, nor can people believe in a social model that delays transformations and turns its failures into endless nightmares. 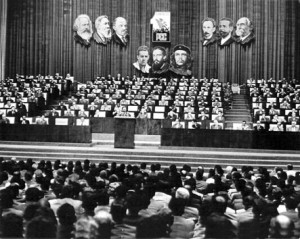 The Congress of the Cuban Communist Party, reorganized in 1965, and recognized in the Socialist Constitution of 1976 as “the highest leading force of society and the state,” continued to political orthodoxy outlined by Lenin, founder of the former Soviet Union, to which we tied ourselves for three decades. At the disappearance of this resources and guidance, the island ship was left to the mercy of the winds. The five-year cycle was interrupted; since 1990 the congress has been held or cancelled according to the convenience of the Castro brothers, party secretaries-in-chief.

Now, after a decade of postponements, the wheels of the totalitarian train roll again, boarding the Party faithful. The whys and wherefores are superfluous, the dictatorship knows their masks. If the compass of the party congresses needs to be reset, they will impose guidelines and directions. For me, however, it’s not worth the time that will be wasted in useless discussions. Opening the doors in the wall would require summoning all the forces on the national stage and normalizing life in the country.