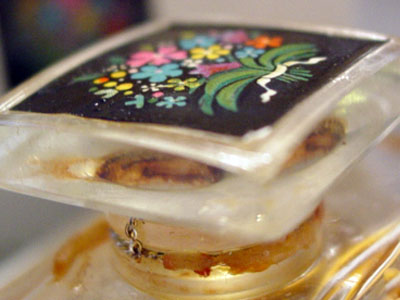 We Cuban women invented alternative cosmetics: cream deodorant mixed with grated color chalk to make eye shadow, shoe polish as eye mascara, yellow soap with oxygenated water to dye the hair lighter or carbon extracted from old batteries to make it darker, detergent instead of shampoo and “Alusil,” an antacid I think, was used as gel for the hair.  My first makeup came from a professional water-color set.  For an age in which image is everything, any resource was welcomed.

What we couldn’t invent was perfume.  As a girl, I loved my mom’s fragrance, the smell in her closet and drawers. It was Fleur de Rocaille de Caron, the last bottle she bought at a beautiful store (La Havana Antigua) which was at Hotel Havana Libre in the early 70’s and when the perfume was gone, my mom took off the top, which was designed with a flower bouquet, and the smell inside her drawer for intimates stayed in her closet and is still in my memory as a smell of “beyond death”.

No matter how badly we wanted, no one or almost no one was again able to come up with a perfume; a good essence was outside the realm of any computation, even the cheap colognes disappeared, which it didn’t matter between so many uniforms and the continuous agricultural labor mobilizations.

Perfumes exercise an inevitable attraction over me.  I believe I could have been a good “nose” for the perfume industry; also helpful is my semi-Quevedian nose. It often frustrates me to celebrate a perfume, ask for the name and the answer is something like,”I don’t know, is a long bottle with a blue top.” I never understood how such an important accessory could be taken so lightly.

When I had perfume, it was Red Moscow.  I didn’t like it but I couldn’t choose.  I envied my sister’s skin, with a spectacular chemistry that would smell almost French when it was just Russian.  Maybe those perfumes were not that bad, but they had something cloying that I didn’t like.

If I had an important outing, I would steal from my mom a small touch of Air du Temps by Nina Ricci that my uncle had brought her from a trip to Europe.  Later, my brother Miguel started working at CAME and from Hungary he brought me Charlie by Revlon, a fragrance known in Cuba as the “perfume of the Community”, and I suppose that it was a pioneer scent in the US perfume industry which was well placed in a market where France reigned indisputably.

One third of the allowance from my first foreign trip in 1979 was spent on Fidgi by Guy Laroche, the first perfume chosen by me among many to choose from. On that same trip, I bought for everyday use Astric, a scent from Germany that I remember with much love, which I suppose is as lost as that Germany.

Throughout the years I have had other good perfumes, but they have been gifts; now they are sold in foreign exchange stores but they don’t even offer a sample to smell.  The same classic French and the Calvin Klein, DKNY, Carolina Herrera and company are so expensive that you have to first buy soap, shampoo and deodorants manufactured by Suchel, a lot more necessary at this point in my life than a brand-name perfume.