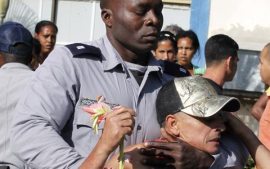 Havana, Agencies, 1 November 2013 – The Cuban Commission for Human Rights and National Reconciliation (CCDHRN) reported Friday that during the month of October there were 909 “politically motivated arbitrary arrests” on the island and warned of a clear trend of increasing repression throughout 2013, EFE reported.

In its monthly report on repression in Cuba, the group led by dissident Elizardo Sanchez said that the number of arrests of October is one of the highest for a month in the past two decades.

The CCDHRN further reported that there was an “unacceptable and unjustified increase” of police violence and “para-police” violence, referring to the so-called “rapid response brigades,” as well as “sometimes covert brutal physical assaults against peaceful dissidents.”

“We continue to suffer from high levels of political and social repression in parallel with the worsening economic situation, increased poverty and the hopelessness of the majority who struggle to survive on an average monthly salary of less than $20, one of the lowest in the world,” says the opposition group.

The CCDHRN hold Cuba’s “top leadership” responsible for this “spiral of repressive violence” along with “the heads of the powerful bodies of political repression and intimidation, guilty of true hate crimes committed under the guise of protecting national security and the public order,” the organization said in its report.