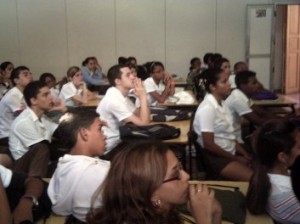 A violation of the Municipal Department of Education here, committed to the timetable for the publication of examination results of incoming students to university, reveals that the Ministry of Higher Education would restrict parental authority.

These past few months, students, teachers and family had to strive to correct the  failures accumulated during years of a poor education system.

In Cuba it is not uncommon to find university graduates–whether doctors or lawyers–with poor speech, who can not write, or do so with glaring spelling mistakes. Many barely know the history of their country.

To mitigate the pandemonium, forged in a social setting where the family was estranged from its original role with regards to school performance borders on idiocy; the high school graduates must pass exams in mathematics, Spanish and history before entering the university.

Since the students or their parents are entitled to complain about unsatisfactory grades–a student was given grade of zero when in fact they had scored 90 points–the national timetable for the information of test results announced in the case of History is as follows:

— Publication of the results of complaints: May 25th, at 9 am in senior high schools.

But the municipal department of education in Puerto Padre violated that schedule. All day the 25th teachers, parents and students waited for a response to their claims… that never came.

According to official sources, it was at 2:47 pm on Friday, May 25th, when the city official in charge of this task presented himself at the university for the results of the claims.

At 9 am on Saturday the 26th, a family in this eastern town (Puerto Padre), was hastily notified to appear just when they should have been there, at the University of Las Tunas.

A quick trip can not be made by bus, but in general cargo trucks adapted to carry passengers, like cattle for the slaughter.

A father and his 17-year-old son had to pay 40 pesos to get one of these vans from Puerto Padre to Las Tunas. If they had a rental car, the price would amount to 200 pesos, that is, about half the average monthly salary in Cuba.

But at the University of Las Tunas they were waiting for a disheartening response.

“Sorry Dad, but only the student can participate in the review of his exam,” they were told, friendly but firmly, by the advisor of the Rector in charge of the Revenue Commission, protected by an ordinance issued in January 2012 by the then Minister of Higher Education, today, vice president of the nation, Miguel Diaz-Canel.

Under Article 38 of the Constitution, parents have the duty to assist their children in the defense of their legitimate interests and the realisation of their just aspirations.

Does the review of a test that is critical to get into the university not qualify as a legitimate and just aspiration?

In Cuba the children reach adulthood at age 18 or by having been “emancipated” of parental rights by marriage.

In accordance with Article 85.5 of the Family Code, parental authority–that is, the authority of parents over their children of unemancipated minors–includes representing them in all legal acts and transactions in which they have a timely interest and exercise oppotunities, and the actions in which they are entitled to defend their interests and assets.

Is it not a parent’s interest to defend the correct classification of a test that his child can gain or lose entrance to a university and thus, his future?

Too bad that a right so sacred to some, is insignificant to others. Perhaps this is because for too many years they separated the children from their parents. Or because they still put a gun in the hands of the boys before they can shave.

Maybe restricting the parental authority of a father in Cuba is a harmless act, if ultimately the Constitution of the Republic Article 43 says that, without distinction, citizens living in any sector, zone or area of cities or staying in any hotel, where segregation is swilling that has undergone an entire nation at the hands of a socialist government telling, the benefits of the country reserved for himself and for the benefit of foreigners.