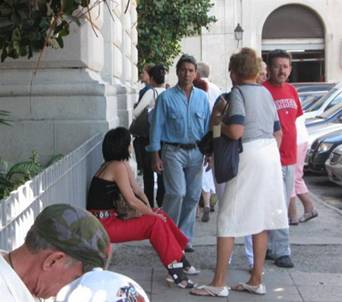 If, in Cuba, you are one of those who has the bad luck of needing to engage in any legal process, as simple as you can imagine, prepare yourself to navigate Niagara Falls on a bicycle. The official in question, and even more so if it’s an attorney or notary, after you start to talk to inform them of the problem, they will take a piece of paper and, without looking you in the eyes, begin to detail all the original documents you will have to present to initiate the process, starting with the obligatory recently issued birth certificate, and if you have one from some time ago it won’t do.

Several questions present themselves here: Why not the Identity Card, where all this data is found, and which is the principal identification document of every citizen? Why not use it for this? Why a recently issued certification? Is it that over time a person’s birthdate changes? These are the bureaucratic absurdities established by our legal system.

Something similar happens when you have a pain and have to go to the family doctor or clinic. You barely present yourself and aren’t even checked out before the doctor starts to fill out controls, orders for analysis and other tests and, in the end, perhaps some prescription. You’re left with the pain and decide to find a friend who’s a doctor who will really check you out.

These simple events are repeated so often that, at times, they even appear in the citizen complaint sections in the official press, but they are not resolved and are expanded in justifications for the mentally retarded.

The socialist government bureaucracy has to rooted itself in these fifty-six years, such that it is more difficult to eradicate than the invasive marabou weed. This is the officials’ way of being and doing in any hierarchy: they are raised this way, educated this way, and act this way.