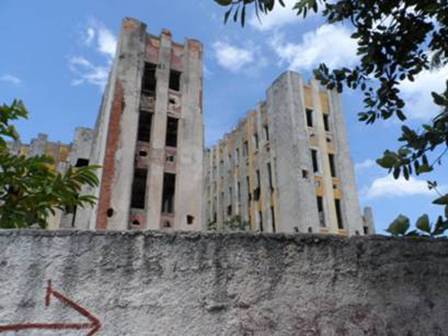 It is painful and embarrassing to travel along the Avenue of the Presidents, more commonly known as G Street and, on reaching the huge monument erected to  President José Miguel Gómez, which fortunately is solid and erect, to glance to the right and observe with amazement this enormous skeletal ghost of what was the Pedro Borras Hospital, the largest example of the Art Deco style in America, dedicated to health, a work of the architects Govantes and Cobarroca, whose work was similar in style and use, but not as big, as that found in Chicago, USA, in perfect condition and providing medical services, while ours is a victim of abandonment and government neglect, which has left it in its current sad state.

The official media blames its deterioration on structural deficiencies that never existed, but they don’t speak of the detonations carried out on the sidewalk in front of it at the foot of Calixto Garcia Hospital, when the fever of explosions to build tunnels, ordered by the official Nomenklatura, infected the whole city, which very possibly caused the damage to its structure. Nor was it ever adequately maintained, nor was the damage that was caused repaired, despite the fact that more than thirty years ago a group of architects, concerned about the conservation of this patrimony, submitted projects (which were shelved) to restore and save the building.

This healthcare colossus remains closed and totally abandoned, a victim of bureaucratic apathy, squatters, depredations and robberies in its facilities. Now it levitates, remaining upright, a static miracle, ready at any moment to collapse and finally fall down, to become a ghost whose death could have been prevented. One more valued heritage lost, like the emblematic Alaska building in the same neighborhood, the responsibility for which will fall historically on the same authorities who have been ruling us during these fifty-five years.

If urgent measures aren’t taken to restore these grande exponents of our architecture, we will also have to painfully witness the death of the Lopez Serrano apartment building, as well as the America Arias Maternity Hospital, both also examples of the most refined art deco style, now in precarious conditions.

By this means I am making an urgent appeal to the sensibilities of those in whose hands  is the power to address and solve this situation, affecting all Cubans in general and our architectural and historical heritage in particular.