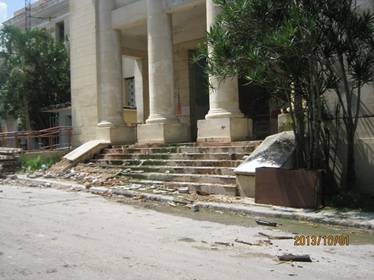 Raimundo arrived early to an offsite clinic affiliated with General Calixto García Hospital that was located in the basements of two old satellite buildings. The waiting room was full and the rumble of voices prevented him from concentrating on the book he had brought along to make the obligatory wait more tolerable. Suddenly an older woman entered the waiting room. She was a newspaper vendor hawking Workers and inviting everyone there to buy a copy to pass the time while waiting their turns. She went on and on, telling everyone she had to do this in order to eat, that she had been a worker at the hospital for many years and that, if she did not do this, she would die of hunger because her pension was so meager, though even when she was working, she still barely made a living.

It was then that an eighty-year-old man, who was waiting to be seen, spoke up and said, “Señora, this is fascism and all our rights are being taken away. This hospital is disgusting. It looks like it hasn’t been cleaned for months. We’re in a dark, humid basement and no one has even put a fan down here to get a little air circulation. If the doctors can’t take it, then what about the patients?”

“Tell it like it is, old man,” someone there said.

The murmur of voices rose in crescendo. Everyone began commenting on the filth, the shortages, the lack of sanitary conditions, the hassles they had to endure to get there by bus because not everybody had ten pesos for a tarecón (a taxi from the 1950s).

Suddenly, a male nurse looked down the wide stairway leading to the basement and called out to the patients in the waiting room, “This man has had surgery. Can someone give me a hand getting him and his wheelchair down the stairs?” The clinic’s door opened and a doctor, fanning himself with a piece of cardboard, said in a loud voice, “Next”

The same old man takes the floor again and raising his voice, so that everyone can hear, says, “Gentlemen, this is our hospital!”