14ymedio/EFE, Havana, 22 February 2017 — The presentation of the Oswaldo Payá “Freedom and Life” Prize has led to a diplomatic conflict, after the Cuban government vetoed the entry into the country of three of the guests: OAS Secretary General Luis Almagro, Former Mexican President Felipe Calderón, and Mariana Aylwin.

Almagro, Calderón and Chilean delegate Mariana Aylwin were unable to travel to the Caribbean country on Tuesday to participate in the event called by the Latin American Youth Network for Democracy, chaired by Rosa Maria Payá, daughter of the late Cuban dissident Oswaldo Payá, which the Cuban government Cuban has labeled a “provocation.”

Around Payá’s house, in the Havana municipality of Cerro, a police operation deployed in the early hours of the day prevented activists from reaching the home. From Manila Park, near the house, State Security agents dressed in civilian clothes demanded documentation from any dissident or independent journalists who approached.

Payá told this newspaper that her phone had been “out of service” in the afternoon although “in the morning it worked.” The ceremony was attended by seven activists who had spent the night in the house “plus another 20 people who where able to reach it,” said the dissident. Among them was the head of the political-economic section of the US Embassy in Cuba, Dana Brown, as well as diplomatic representatives from Sweden and the Czech Republic.

Payá said that the award ceremony had been surrounded by a lot of repression on the part of the regime, Cuban State Security and the Foreign Ministry.” She condemned the reprisals “suffered by civil society members who wanted to participate in the ceremony, resulting in many of them being arrested and others prevented from leaving their homes.”

All of the leaders of the opposition groups on the island “were invited,” Payá told this newspaper. “There are some with whom we have lost communication over the last few days because of everything that is happening, and others who are not in the country and others who couldn’t get here.”

Luis Almargo tweeted: Our interest: To facilitate #Cuba’s approach to Interamerican values/principles and to expand the country’s achievements in science, health and education. 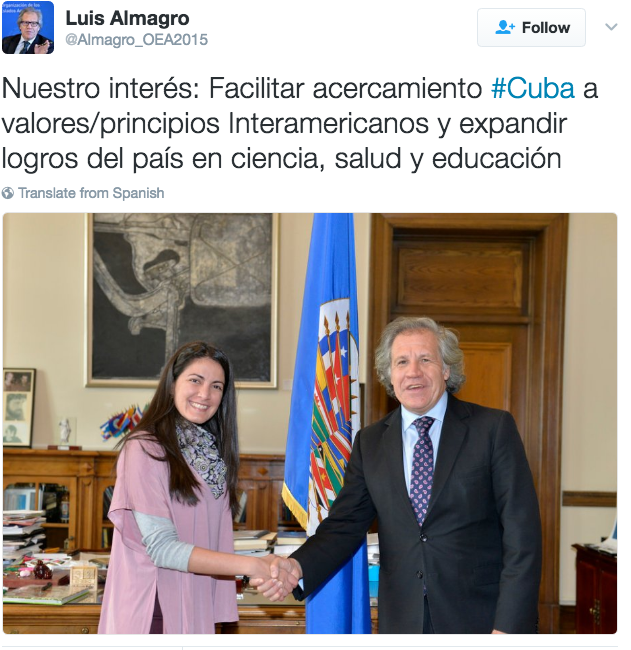 The Chilean and Mexican Chancelleries regretted the decision of Cuba, and Chile announced that it will call its ambassador on the island for consultations.

Meanwhile, the only official response from Cuba has come from the Cuban embassy in Chile, which issued a communication referring to the matter as “a grave international provocation against the Cuban government,” with the aim of “generating internal instability” and affecting Cuba’s diplomatic relations with other countries.

According to this note, the act was created “by an illegal anti-Cuban group that acts against constitutional order and that arouses the repudiation of the people, with the collusion and financing of politicians and foreign institutions.”

The only official response from Cuba has come from its embassy in Chile, which issued a communication referring to the matter as “a grave international provocation against the Cuban government”

The ceremony finally took place without the presence of the international guests. “The chairs will remain empty” until the awardees “can land in Havana” to pick them up in person, assured Rosa María Payá. Other Cuban guests were prevented from leaving their homes or arrested on the road.

Independent journalists Henry Constantin Ferreiro and Sol García Basulto were detained in the airport of Camagüey at the moment that they tried to board a flight towards the capital.

Constantín Ferreiro is vice-president of the Inter-American Press Association for Cuba and remains in custody without his parents being able to see him or provide him with personal hygiene supplies, according to his father.

Havana’s decision not to authorize the arrival of the head of the OAS was known after a night of uncertainty in which it was not clear whether Almagro had traveled to the Cuban capital, where he initially planned to fly from Paris, where he had participated in institutional activities yesterday. Rosa María Paya today called on the OAS to support the right of the Cuban people to decide on their destiny.

“To the point that Cuba is democratizing, all democracies in Latin America will also gain stability,” said the opposition leader, who hoped that “today is the beginning of an OAS commitment to the cause of rights and freedom in Cuba.”

She pointed out that they do not expect the OAS to “speak out against anyone,” but instead to put itself “on the side of all Cuban citizens in their right to begin a transition process.”