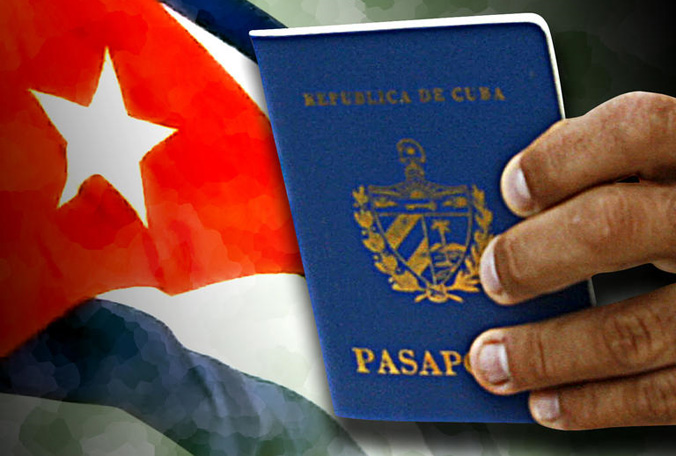 On Friday, April 20, Ricardo Alarcon, President of the Cuban Parliament, in an interview with the digital daily World, of the Huffingtonpost.com, reaffirmed Raul Castro’s announcement from last year that Cuba will launch “… a radical and thorough immigration reform in the coming months …” which will remove restrictions we’ve had for decades on Cubans traveling abroad. Let’s remember that even now, to travel abroad Cubans need an exit permit, at the extortionate cost of $150 U.S., which is good for 30 days and can be extended 10 times, after which they must return home or lose the right to reside in their own country.

In force since the dawn of the Revolutionary process, restrictions imposed on the travel of Cubans to and from abroad, have become one of the most serious stigma carried by this government. This abusive policy has been responsible for an incalculable amount of suffering for our people, having separated for decades, and even permanently, thousands of families.

Alarcon also said that “… there is another explanation for these restrictions: the need to protect our human capital. The training of physicians, technicians, teachers, etc., is very expensive to the Cuban State and the United States does everything to deprive us of this human wealth.”

Sustained by the need to avoid a brain drain, among other arguments, this policy has systematically deprived Cubans of one of the most basic rights of man: the right to free movement and to choose where to live. But in resolving this issue, it seemed much simpler to our government to retain, by force, the professionals, than to guarantee them a dignified way of life which, in medical terms, would be the equivalent of amputating the limb of a patient suffering from lymphatic vessel inflammation which, it is true, regardless of the consequences, would “solve” their problem.

Alarcon said the reform will also favor the Cuban immigrants who today need an entry permit, who do not now have the same “profile” as those who left in the early years.

“Things have changed a lot (…). Nearly half a million Cubans installed outside our borders visit each year. The vast majority of Cuban migration has a normal relationship with their country of origin…”

What has never been even remotely normal, however, is the relationship of the Cuban State with respect to that emigration. As for the “profile” of these emigrants, Mr. Alarcón knows that definitely changed after that wave of the first five years of the Revolution, when it constituted mainly of former Batista supporters and oligarchs.

By the time of Camarioca, of the Mariel boat lift, and of the Maleconazo and the subsequent rafter crisis in 1994, Cuban migration had been made up of people who were, as a rule, younger, and desperate to having lost all hope in their country.

Alarcon also said that “…the immigration issue (…) has always been used as a weapon to destabilize Cuba since 1959 and as an element of distortion of the Cuban reality…” and, he says it as if he were talking about some sneaky trick orchestrated by Yankee think tanks, as if it were a true aberration systematically and massively perpetrated for half a century by the Cuban Government against the will and interest of its people.

At this point some questions present themselves: Why right now and how far will they dare to go? In Havana circles of thought whose opinion I could sound out, it is said that these measures could be oriented with the foresight to open the door to a Cuban emigration that so far has been unnaturally excluded from investing in its own country due to the absurd policy followed by our government, which for decades has preferred to negotiate with foreign investors before offering any opportunity to offer its own emigrants or their descendants. This posture presumably reflects a deep fear of the influence that they might come to gain in the domestic political environment.

This may or may not be the result of the uncertainty that surrounds Hugo Chavez, whose health is perceived to be broken just a few months before the upcoming Venezuelan elections — because losing his support now would be lethal — as will be seen.

But what offers few doubts is that the emigration, although eager to invest in Cuba, given the traumatic memory of the expropriations of the past, might be demanding a series of legal safeguards to make sure that, this time, their investment would not be impounded, beginning with radical changes in their migratory status which, until today, has completely denied their Cuban citizenship.

Another side of the coin makes this moment most “opportune” — for the Cuban government — as the time to make this decision, because if they finally decide to open the doors wide, then there would be embassies in Havana that would possibly close theirs, and show more aversion to issuing visas, not to mention that the U.S. government might repeat the controversial Cuban Adjustment Act.

Even so, those who finally manage to travel will find the majority of their destinations in the world mired in the worst economic crisis since the Crash of 1929, and not offering too many opportunities right now to any newcomers. If to this we add that those who leave no longer face the confiscation of their house and so can leave here their home, family and concrete interests and can return when they please, then I would dare to predict that the first wave of emigrants would stabilize in a few years.

In exchange, the remittances would increase and provide considerable oxygen to the economy — in this sense the investments of the emigrants, were they authorized, would be crucial — and the country would begin to flow in a much more natural way.

So, how far will they dare to go. They certainly have to be thinking big, or everything would be half measures. For an immigration reform today at the level the Cuban people need, they have to leave behind all the current policies. They have to guarantee, unequivocally, through an appropriate body of binding laws, that every Cuban citizen can enjoy his or her right to freely leave the country, and equally to enter it without conditions of any kind including, of course, political ones, for differences of opinion, which would exclude only those involved in terrorist acts, or those who have a debt to the legal system, beyond which absolutely any official who dared to violate this right of a Cuban citizen would be legally called before a People’s court.

It is also urgently needed to eliminate once and for all the ominous category of “final departure,” a monster that has uprooted entire generations of Cuba, as well as the controversial “letters of invitation” and of course, crushed under its own weight, the odious permission to leave or “white card” whose funeral no one would attend.

But one point I can not overlook in this matter is one of the most controversial nuances, and that is the solution to the problem or releasing those workers in my sector who are required to apply for permission if they wish to permanently or temporarily leave the country.

Who could forget the thousands of former members of the Cuban Public Health sector, who, overwhelmed by spurious wages and harsh living conditions, and finding no other means whatsoever to emigrate, decided to leave from some Medical Mission work abroad, and so were branded with the status of deserters and condemned to banishment, not permitted to enter their own country for at least 10 years?

Would anyone dare to catalog as normal the relations with these emigrants before such heinous treatment? Without any doubt, we can assert that the workers in the Cuban Public Health have received the most denigration treatment in this story and today our government has the opportunity to redeem its position, hopefully to act with wisdom.

Any approach that they apply to the immigration issue at this time, that does not address everything at once and guarantees our right to travel, will restrict the freedom of the Cuban people, and therefore work against the prosperity of the country.