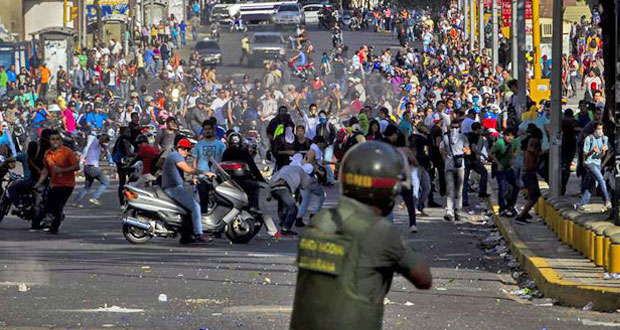 Somos+, 4 August 2015 — Mauricio Macri, chief of the government of Buenos Aires, wrote an open letter to Nicolas Maduro. In it he urges Maduro to support the right to think differently and to restore the guarantees to make this happen. Above all, he reminds Maduro that the thousands of people whom he has called fascists are none other than his own people, who are demanding a system that includes them.

Governments should stop labeling and inflicting physical and psychological violence against those citizens who peacefully speak out for a political alternative. This is one of the premises of Somos+ (We Are More) and we want all Cubans to soon be able to enjoy this great freedom.

Letter from the Government of Buenos Aires to Maduro

Obviously you and I see different things, and in different ways. For example, where you see enemies that you want to annihilate, I see angry Venezuelans demanding changes to their government. Where you see a conspiracy, I see Genesis Carmona being carried away on a motorcycle, shot dead at age 22. And I do not see you. I did not see you at the funerals of those innocents.

Where you see protesting fascists, I see people, human beings who disagree with you. They do it however they can, they are people, they are also the true Venezuelan people. Or is it only those who applaud you who are the people, and the others are enemies? I also see what you seem not to see. I see the dreaded motorcycles of paramilitary groups that under cover of night shoot at unarmed civilians, even firing into their houses and apartments, as shown in the videos on Youtube.

Where you see in the social networks only defamation and lies (what is there I condemn), I find also the real outrage of Venezuelans, who there have the only remaining space left to them to fully express it, because you have virtually shut them out of means of communication because the others you have closed down, choked off, and driven out of the country. How fortunate that Twitter and Facebook are there so they can let us know what is happening in Venezuela!

Previously the Argentine government extended to you its “total and absolute support.” You should not confuse the Argentine government with the Argentine people, as we do not confuse you with the Venezuelan people. We do not all support you totally and absolutely in your abuses. I, for one, would rather demand the immediate release of Leopoldo Lopez and all Venezuelan political prisoners. I choose to ask you to take control of the paramilitary forces that spread fear and death by gunshots. I prefer to ask you to ensure freedom, and to sit down in honest dialogue with those who think differently.

The protesters are not enemies or conspirators, they are Venezuelans.

Source of letter is here.