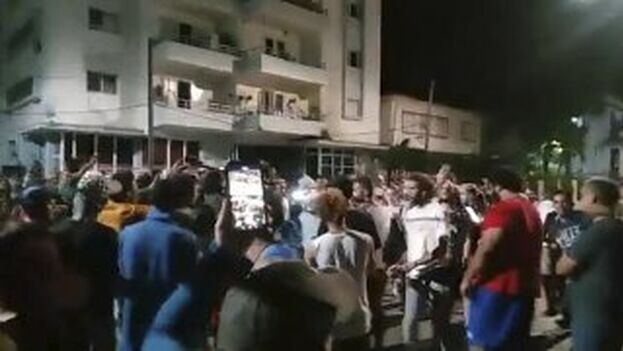 14ymedio, Havana, 12 November 2022 — Prisoners Defenders (PD) documented 27 politically motivated arrests in October in Cuba, bringing the total number of Cubans who remain in jail to 1,027. In its most recent report, released on Friday, they also denounced that the population on the Island is “massively fleeing repression.”

The Madrid-based NGO, signals the Cuban regime as one of the few in the world that supports the Russian invasion of Ukraine and that this alliance between Havana and Moscow has not improved living conditions for Cubans who continue to suffer long blackouts, shortages and an unprecedented migration crisis.

Most of the new arrests are linked to the protests that took place at the beginning of October this year, states PD, and were due to the collapse of the National Electric System following the passing of Hurricane Island on the western part of the Island.

Although most of the protest documented by PD correspond to the months following the mass protests of July 11th (11J), the number of prisoners has increased significantly since the beginning of 2022.

The number of prisoners increased from 591 in November 2021, with 684 arbitrary detentions in 2022 for a total of 1,275 prisoners of conscience. Of these, 247 were released under “severe threats and mainly for fully completing their sentences,” leaving 1,027 still serving sentences of up to 30 years.

In its report, the organization included 34 minors — 29 boys and 5 girls — who are serving sentences or are being criminally prosecuted. At least 15 have been sentenced to five years in jail for the crime of sedition, which has been used to prosecute dozens of protesters.

The organization specified that, included in its list, are 121 women with convictions that are either political or of conscience. This group excludes transexuals who are being held among male prisoners, totally disrespecting their rights, where they endure “indescribable situations due to their sexual identity.”

Similarly, another NGO, Justicia 11J, has documented 162 arrests of protesters who participated in 202 public protests between August and October 2022. Of these, five are younger than 18 years of age — the minimum criminal age in the country is 16 years — and 78 remained in detention as of the beginning of November.

In the last three months protests were documented in 14 of the Island’s 15 provinces where there were at least 55 protests and in Matanzas where 19 were verified.