We make available for anyone who wants to know the truth and have all the evidence of the judicial effrontery against Angel Santiesteban Prats, the complete record and all the documents that form part of this judicial farce behind which they incarcerated him in concentration camp 1580, El Pitirre, San Miguel del Padron, Havana, where they keep him in a grim regimen, besieged, blackmailed, threatened and isolated from his peers

Furthermore, we facilitate here — again — access to the proof of the innocence of Angel and to that which proves that Angel is an object of persecution on the part of the State Security for political reasons since he decided to open this blog.  On the video of Reasons for Cuba, Cyberwar, they recognize him blatantly and declare him “cyber mercenary enemy of the Revolution.”  The last violent action against him, being still at liberty, was recorded on video on November 8, 2012.

Also, we show some photos of Angel with is son Eduardo taken at different times, including when the complainant, the ex-wife Kenia Diley Rodriguez Guzman, testified that the boy had a terror of his father because of the blows that he gave him.  One can draw his own conclusions.

The objective of publishing here everything together is to shed light on the case, deliberately hidden from Cuban public opinion (and international, although they have not managed this), which public does not know that Angel was submitted to a rigged trial by false claims and incarcerated for five years with the sole purpose of silencing him and using him as an example of what awaits those who dare to defy the Regime.

If Angel were guilty of the crimes imputed to him and the trial to which he was subjected assembled all the legal guarantees, if the condemnatory sentence were just, could it explain why the Havana Regime keeps everything secret from the Island’s citizens?

We know on good authority that even those who have signed the shameful statement against macho violence promoted by the writers of UNEAC, the only object of which was to criminalize Angel and turn him into the paradigm of the violent and macho Cuban male, have done it under pressure and without ever having had at their disposal the information and documentation about the case.  But the more outrageous and incredible thing is that neither have the sponsors of the infamy ever had it, that is to say, those writers — among which there are friends quite close to Angel — who know that it is all a farce in order to silence him.  Regarding close colleagues and/or friends, who well know how Angel is, having been paid to firmly believe the dictation of the political police without having asked for proof before pronouncing, it converts them to slanderers that, sooner or later, must render accounts before Justice.  They have indulged and validated the rape of all of Angel’s rights, but, even more seriously, have themselves raped Article 12 of the Universal Declaration of Human Rights:  No one will be an subjected to arbitrary interference in his private life, his family, his home or his correspondence, nor to attacks on his honor or his reputation.  Every person has the right to the protection of the law against such interference or attacks.

The writers from UNEAC, sponsors of the infamy, should go read carefully the Penal Code, paying special attention to articles 318, 319, 320 and 321, which speak of defamation, infamy and injury.  It does not take much for democracy and the state of law to again prevail in Cuba, and then they will have much to explain before Justice.

In case the mentioned writers do not have the Penal Code, here we provide the article that they will have to have learned well:

1. He who, before third persons, imputes conduct, event or characteristic to another, contrary to honor, which can damage his social reputation, lessen public opinion of him or expose him to the loss of trust required for the performance of his duty, profession or social function, is sanctioned with deprivation of liberty for three months to a year or a fine of 100 to 300 shares or both.  2.  The accused does not incur any sanction if the proof that the accusations that he made or that he propagated were true or that he had serious reasons for believing them, as well as that he worked or that he fundamentally believed to work in defense of a socially justified interest.

3.  The test provided for in the previous section is not admitted for the accused if he manifestly had no design other than to denigrate the victim.

4.  If the accused does not prove the veracity of his imputations or retract them or they are contrary to the truth, the tribunal consigns to him the sentence and must give the victim the due record of that fact.

1.  He who knowingly divulges false events that redound in discredit to a person, incurs a sanction of deprivation of liberty of six months to two years or a fine of 200 to 500 shares.

2.  If before the tribunal the guilty party acknowledges the falsity of his statements and withdraws from them the sanction is deprivation of liberty of three months to a year or a fine of 100 to 300 shares.  The tribunal must give the victim due record of the retraction.

1.  He who purposely by written or spoken word by means of drawings, gestures or acts offends another in his honor incurs a sanction of deprivation of liberty of three months to a year or a fine of 100 to 300 shares.

2.  The tribunal can withhold the sanction if the injury is due to the provocative behavior of the victim or if he reacted immediately with another injury or attack against bodily integrity.

1.  The crimes of calumny and injury are only actionable by complaint by the offended party.

2.  Defamation requires complaint by the offended party.  If the defamation or calumny refers to a dead person or one declared absent, the right to sue or to establish the complaint falls to his closes relatives.

Now, with the publication of the full record, we expect that all those who have judge without knowing, will be informed and will realize the grave error of commenting gratuitously.  Expecting correction from those who have defamed and injured Angel is much to ask of people whose morality is worth what it weighs, that is to say, nothing.

Value the recognition for all those who do not judge without evidence.

Now, let’s see how those who have done it sustain their infamies.

The Cuban Juridical Association, through its various specialists, legally dismantles in this video the farce mounted against writer Angel Santiesteban-Prats.

The Cuban Juridical Association, through its various specialists, legally dismantles in this video the farce mounted against writer Angel Santiesteban-Prats.

This is Eduardito, in the arms of his father Ángel.  Kenia Rodriguez testified that the boy was terrified of his father because of repeated beatings that he suffered at his hands.

Ángel and his son when he was already separated from Kenia Rodriguez, mother of the boy and who testified that this boy was terrified of his father because he hit him.

Ángel and Eduardo, one month before they jailed the writer.  His son always next to him.

Ángel and his son Eduardo February 27, 2013 during the tribute that they made to Angel before his incarceration the following morning.  Eduardo was not separated for even a moment from his father. 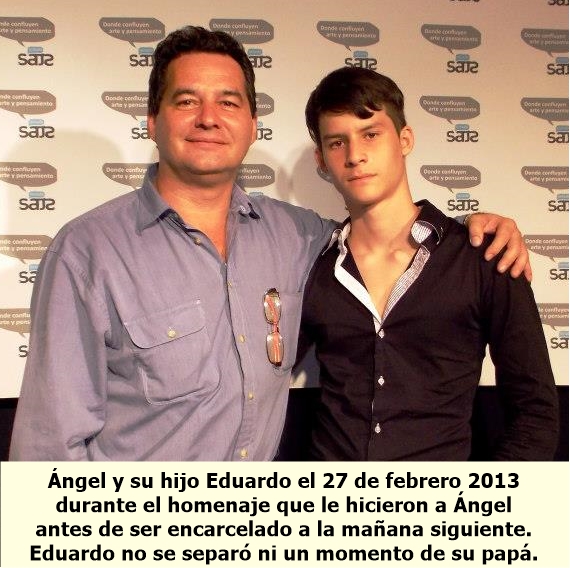 Eduardito saying goodbye to his father Ángel in the patrol car when he is about to be transferred to the Valle Grande prison, February 28, 2013.  Kenia Rodriguez had testified that he son was terrified of his father because of the blows he dealt him.

Ángel with his arm fractured from the beating that they gave him in May 2009 warning him not to be counterrevolutionary.

The shirt that Ángel was wearing when he was arrested and violently beaten November 8, 2012 across from the Acosta police station