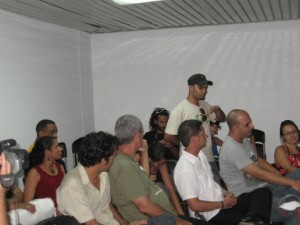 Like two boxers who stare each other in the eye, before beginning their attack, came TwittHab, the first encounter between official and alternative ‘twitterers’. If the proposition was to fraternize and build bridges, this first exploratory round between virtual gladiators who’ve made blogs, Facebook and Twitter a tool for spreading their ideas, was below expectations.

The cause wasn’t the attendance at the debate of heavyweights. The star blogger of the alternatives, Yoani Sánchez, was mute. Also absent were Claudia Cadelo, Reinaldo Escobar, Dimas Castellanos, and Miriam Celaya — bloggers of an indubitable level.

For the band of those supporting Fidel Castro’s brand of socialism neither the excellent bloggers Sandra Álvarez, nor Elaine Díaz, nor the ghost-like Yohandry Fontana appeared. But it wasn’t bad. It is always welcome to build bridges.

And of course, the dialog, the presentations and the interchange of e-mails between cybernauts who sometimes trade acidic disqualifications on the net are preferable to physical violence practiced by the piece by certain groups loyal to the regime.

Four in the afternoon of Friday 1 July passed in an aseptic cubicle in the Cuba Pavillion, in La Rampa, in the heart of Havana, a chat was started between ‘twitterers’ accepted by the government and the others, those who want profound changes in the matter of political and economic freedoms.

The pro-government ones played with a 5:1 advantage. Of the more than thirty attendees, there were only six independent bloggers and ‘twitterers’. Leunam Rodriguez, a young twenty-something who seven months ago opened a Twitter account, played moderator. The exchange started cold, with scorched looks and the logical suspicion between persons who reside in a nation where debate of opposite opinions is a rare bird.

Of course, respect got priority, although there were threats of uprisings. One of them happened when the blogger Henry Constantín, after noting gratitude for the diplomatic and polite climate, said “Some days ago, when I was expelled from the Instituto Superior de Arte (ISA) for political motives, I was beaten and received threats from State Security, now in this room I see that I can state my opinions without receiving a sudden volley of blows”.

The response of the official bloggers and twitterers was that in this encounter there would be no blows. Leunam defended the right of each one to freely express his views, as much on the net as in any other way. He declared himself a part of the revolutionary project and paraphrasing the troubadour Silvio Rodriguez, noted that “revolution is evolution”.

And so, when an alternative blogger identified as Agustín López gave a speech with clear political bias, the journalist, blogger and editor of the magazine The Middle Way, Enrique Ubieta, jumped like a spring.

“Please, we are here to fraternize, not to make political allegations”, said Ubieta. A difficult result in a meeting between individuals with different ways of thinking, politics doesn’t rise to the fore.

It is precisely the political arguments that make citizens different. If they had talked about sports, stamp collecting, fashion, or cinema, perhaps everyone would have ended up drinking some beers in a bar.

But if they share political differences, Cuban bloggers from one or another group, we’ll have more things that unite us than divide us. We all suffer chaotic public transport, the poor state of the streets and housing, and how expensive it is to bring food home to the family table, among other material difficulties.

Talking is always healthy. To reason and respect the discrepancies of others. Softening jealousies will cost enough. Something is more than nothing. And at least in this first encounter, ‘twitterers’ of both groups could look face to face and even exchange greetings.

It would have been better if there had been some principle players in this virtual “battle of ideas”. We missed Elaine and Sandra, Yoani and Claudia. And those present remained without knowing who, in reality, is Yohandry Fontana — he will keep being an ethereal guy, a question mark.

Perhaps these debates with uncovered faces will be a test balloon on the part of the government of Raúl Castro. Or they might not be. We’ll give him the benefit of the doubt.

Photo: Iván is the mulatto whom we see in the last row, on the left.