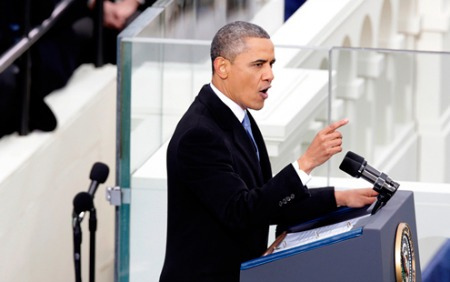 The presidents of the United States have been a taboo topic in Cuba for 55 years. The image of the Evil Imperialist could only be authorized by the upper echelons of the propagandists of the Communist Party (the only legal one in the country) or, where appropriate, by the Council of State itself. The idea was to depersonalize and discredit all the men in the White House (the pamphleteer documentary filmmaker Santiago Alvarez incarnated the vile vanguard of that mission). Every foreign enemy had to be to artificially animalized, assassinated like one more internal opponent. Only in this way, by elementary media comparison before the eyes of a captive audience, could the image of the sublime Maximum Leader shine more brightly in our hearts:

After nearly a decade of censorship in Cuba (despite the fact that the signal is received and the channel is invaded by Cuban staff), the TeleSUR channel started to be freely seen in Cuba as a New Year’s gift from the Raul regime. It is no longer just Walter Martinez’s pirate eye-patch, savoring the deferred Bolivarian pap of the continent’s illiterates and fanatics, indeed now we have Mr. Barack Obama live and well on every television set in Havana.

And, to the discomfort of everyone at home, it then turns out that the skinny guy from the Mulatto House in Washington doesn’t scream or threaten the public with his hooked fingers, nor does he wear a military uniform, nor does he spend hour after hour jabbering on to the millions and millions in his Babylonian nation. And to make matters worse, the guy looks like a citizen and, what’s more, spoke about urgent ecological concerns, the rights of minorities (he represented the LGBT community better than our National Assembly), of social projects without the need to sacrifice another half century (while simultaneously the police authorize a protest against him).

Afterwards, in the neighborhood, someone made a joke about how in the upcoming elections the ballot would include an extra little box to validate Member of Parliament Obama. That would give publicity to this historic little joke even on the internet. If I were the Cuban State, I would not take lightly this symptom of tastiness or scorn for Cuban neighborhood socialism. And, just in case, I would install one more arm chair in the meeting hall of the National Assembly.