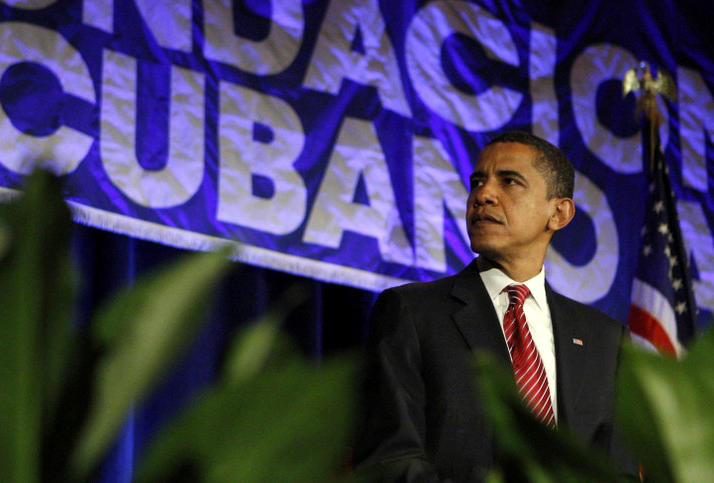 According to Jonathan Swift, when a true genius appears in the world we can recognize him by a sign: All fools conspire against him.

I believe we could easily adapt this maxim – taken from the stupendous novel “A Confederacy of Dunces” by John Kennedy Toole – to another context: When a sensible president appears in one of the world’s great nations, it is not long before fools join against him.

I think of this each time I hear Barack Obama uphold his policies in that singular case which has come to be called Cuba. I think it each time I hear his thoughts consonant with the primary needs of Cubans in these times.

For my part, knowing that President Obama distanced himself from previous positions — unsustainable as they were within the current context of the Caribbean nation — as soon as he arrived at the White House, seemed to me a breath of fresh air. A good omen that came to me in my remote provincial city in Cuba.

I was not alone. I remember the endless debates among young people who in different ways, both more publicly and more surreptitiously, disapproved of the monolithic system under which we grew up, of the harmful policy promulgated by George W. Bush during the eight endless years of his government.

I risk a generalization: the vast majority, by far, of Cubans on the Island, the generations who undoubtedly will build a better country for their children and grandchildren; the huge majority of dissidents both notorious and unknown, Cubans detached from the indoctrination, tired of lies and bland politics, wholeheartedly approve the measures taken vis-a-vis Cuba by the current U.S. administration.

While not a few idiots conjure the accusation that Barack Obama has allied himself with the tropical regime in Havana, allowing Cuban-Americans to travel at will to the country of their birth, and ignoring how much money a waiter in Hialeah sends to his mother in Santa Clara.

Another tiny and poorly mounted campaign offers as evidence of this insensitivity of the Obama administration toward Cuba the cutting of funds to promote Democracy in Cuba to organizations such as the “Cuban Democratic Directorate,” or “Advocates for a Free Cuba,” intentionally ignoring the reallocation of these funds to other institutions more in sync with the current administration, such as the Human Rights Division of the Cuban American National Foundation.

Suspiciously, this class of anti-Castro fighters who call themselves “intransigents” and fiercely defend the asphyxiation of Cubans as a route to regime change, do not inhabit the country. I didn’t meet them in the Cuba I left behind nine months ago. They are outside of it, well-sheltered from the prevailing misery, and the asphyxiation of the official disinformation. In the overwhelming majority of cases, their families are. As a mountain song very popular in the Cuban sierras would say, “Yep, it’s easy, pal!”

The rationale for this is simple: restricting remittances from Miami to Cuba would have its effect in the stomachs of the Cubans, who would inevitably end up toppling the dictator. What none of these thinkers and architects of Cuban freedom has ever explained to me is what they themselves are doing outside Cuba. What are their families doing outside Cuba? Why should my mother, my grandmother, be the ones who rise up against the tyrant as a result of their policies while they are sitting safely by with a shot of Bacardi in hand.

What has been the policy focus of Barack Obama? Towards truth like a temple: the natural scenario, the preferred habitat of every dictator is isolation. It is at a distance, separated, in the prohibitions, where all the authoritarian regimes in History have found the best conditions to perpetuate themselves. This is their sauce, cooked there with skill.

When I hear Obama defend his positions on Cuba, defend the need for Cubans to demarcate themselves from the State and take advantage of new forms of communication with the exterior, I come to see only two possibilities with regards to his detractors:

1. Either their disconnect with that country is so insurmountable — even when they don’t sense it — that they do not understand the damage that has been done to the monolithic regime in Havana from the entry into its lands of inhabitants from the free world, the contacts between human beings and slaves.

2. Or blind Republicanism of the type, “do whatever you have to do to confront him” clouds their reason and distorts their attempted good intentions toward the Island.

There is no other way I can understand, for example, how these champions of the Cuban cause can praise George W. Bush as the most consistent, hard and admirable president of the last decades.

Setting aside the shame that surrounds the most unpopular president in American history, the most uneducated and the most notoriously incompetent, I believe that a single question collapses the myth: What did the “admirable” Bush policy achieve in Cuba, with his fiery little speeches and his limits on remittances and travel between both shores?

Did it, in fact, achieve anything? Yes, a lot: under his administration the regime of Fidel Castro dictated the most astronomical possible sentences against independent journalists; mobilized interminable forced marches in the country; suppressed with great effectiveness popular protests; sustains an absolute monopoly on information; and enjoyed silently the estrangement of families, this time imposed not by its own directives, but by the country that for many is the paradigm of a modern democracy.

In short: I would be willing to believe in the effectiveness of the Republican prohibitions if they showed me one, just one, of the accomplishments of these policies in the lives of Cubans on the Island.

All this discounts a fundamental factor: the Texan Bush was not only the most unpopular president among Americans. He was also so among Cubans on the Island: as if it’s not enough to have the iron fist of the family dictatorship shoved down the throats of 11 million people, now the president of a nation that should ally itself with the victims did exactly the opposite — it prevented our families from visiting us, from alleviating our hunger and longings. And meanwhile, Bush won applause in Miami’s Little Cuba for “doing what was really necessary.”

Making Cubans independent of the State; breaking the monopoly on information so often mentioned by Yoani Sanchez and directly promoted by Barack Obama; allowing contact between Cubans on both shores — not only as a political strategy but as a sacred right that belongs to them — seems to me not only defensible for those of us who know the tropical monster from within, but for all those who have a genuine interest in prosperity and democracy for Cuba, beyond the demagoguery disguised as patriotism.

The rest goes a long way to please the stiff ears of certain sectors that don’t live in Cuba and seem not to notice it. It serves to disguise the lack of serious and effective policy proposals, with the mantle of exhausted rhetoric. But at least to Cubans now, those on and off the Island, it definitely does not deceive us. Not by coming together will the voices of certain dunces be heard any louder.