14ymedio/Mario J. Penton, Havana/Miami, October 12, 2019 — Through August of this year at least 20,700 Cubans arrived at the US border with Mexico, according to data published by Customs and Border Patrol (CBP), triple the number for the same period in the previous year (7,079).

The avalanche of migrants coincides with the worsening of repression and the economic crisis on the Island, but also with more restrictive policies from Washington toward irregular immigration.

“The economic situation of Cuba, which is on the threshold of a new Special Period, along with the suspension of US programs like Cuban Family Reunification and the Parole Program for doctors has enormously complicated the migration outlook,” says immigration lawyer Alejandro Vázquez via telephone from Miami.

According to figures published on CBP’s website, despite this increase, the number of Cuban migrants arriving at the border is lower than the high points reached before the end of the wet foot/dry foot policy, repealed by former president Barack Obama in January of 2017, which granted refuge to all nationals of the Island who arrived in the US.

In 2016, just before Obama put at end to that presidential decree, 41,523 Cubans arrived at the United States border. Thousands more arrived through airports and the sea. But the situation today is very different to that of those years, given that the US has suspended consular procedures in Havana as a result of the “acoustic attacks.” Now Cubans must appear at the American consulate in Guyana and the process is much slower. 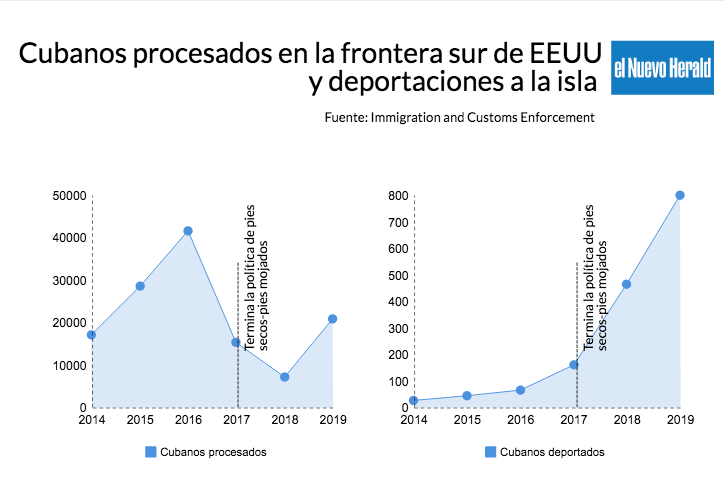 The United States also eliminated the multiple entry visa for Cubans known as the “five-year visa.” In a statement the US Embassy in Havana said that this decision had been made in reciprocity with the visa that Americans receive to enter Cuba.

Along with the migratory problems must be added that, upon arriving at the southern border, Cubans must follow the Treaties for Migrant Protection signed by Mexico and the United States which oblige them to remain for months in Mexican territory while their asylum requests are processed.

“After the wet foot/dry foot law was repealed, Cubans came to be treated like other Latin American immigrants. First they must demonstrate a credible fear of persecution and then request asylum and be granted it, which is an extremely difficult process,” added Vázquez.

A report from the Transactional Records Access Clearinghouse (TRAC) at Syracuse University, in New York, affirms that since January 11,804 immigrants have been sent back to Mexico to wait for their audiences.

To a question from El Nuevo Herald, of Miami, about the number of Cubans waiting for asylum in the north of Mexico, the National Migration Institute of that country answered that they did not have statistics by nationality.

President Donald Trump has been very critical of asylum requests at the southern border. “No more fake asylum,” tweeted Trump in Spanish in the middle of September. “No more catch and release. No more illegal entry in the United States,” he added.

With Trump the number of Cubans repatriated to the Island after being denied asylum has increased. According to the latest statistics reported by the AP agency, more than 800 Cubans have been returned to their country, even when they had expressed fear of being repressed by the Island’s authorities.

Last Wednesday the newspaper Washington Blade reported that Immigration and Customs Enforcement (ICE) had appealed the decision of a federal judge who granted political asylum to the independent journalist Yariel Valdés González, who had spent several months in a detention center. The contributer to Tremenda Nota won his asylum case after appearing before a judge in the middle of September at the Bossier Parish Medium Security Facility in Plain Dealing, Louisiana.

“It’s really sad that after such a long journey, after losing everything, you end up in the same country from which you fled, just when you’ve requested asylum in what we think is the country of freedom,” says Remigio, a Cuban who was just repatriated to the Island after spending six months in an immigration prison in California.

“The officials treat you like a dog. They don’t let you explain hardly anything and they demand a lot of proof. I really wasn’t expecting it to be like that,” he said via WhatsApp from Fomenta, a small city in the province of Sancti Spiritus.