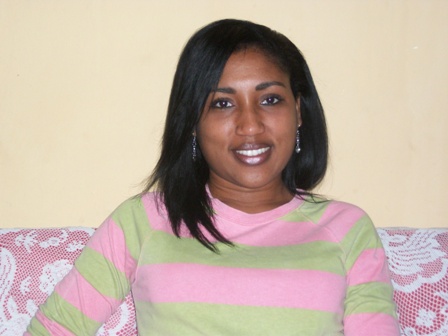 The afternoon of November 7th I couldn’t imagine that I’d trade my name for a number. I went out at approximately two in the afternoon to take a serving of soup over to my father, who’d been admitted into a hospital. While I was going down the street I live on, the #950 patrol was driving slowly around the area. When I was almost crossing the road, I heard a sharp braking. An agent from State Security called me by my name and said the usual: “You have to come with us and turn off your cell phone.”

I had made the made the call to which I have a natural right and no one can deny me beforehand. Thus I at least was able to report my arrest. Because of my short height, the fact that I’m a woman and unarmed, I didn’t deserve the corpulence of badge numbers 29128 and 29130, by whom I was taken to the back seat of the patrol car without knowing the reason for nor the place of my destination. When I asked, the agent limited himself to saying “you’ll see where we take you, I felt like meeting you, but today you’re going to find out who I am.”

My surprise wasn’t much at seeing my destination was 100 and Aldabó. I’ll confess I thought at first it would only be a few hours’ detention. Under the pretext of spreading false news against international peace, they took blood samples from me and seized all my belongings. An officer told me that I must read a sign on which are listed the rights and responsibilities of detainees, as if they were worth much. Then I was led into a small room where they gave me a gray uniform and told me to always carry my hands behind my back: so that I’d not be reprimanded!

They gave me two sheets, a blanket, a towel and a mattress pad. I forget who, but someone said “she will spend a few days here.” During more than three hours of questioning, the case officer tried to deciphermy thinking and collaboration with Cubanet. He sought an explanation of whathis superiors classified as a process of metamorphosis: “from a judge to a counterrevolutionary.” Making it clear that that would not be our only conversation, an officer took me to a cell with two other prisoners, who had been there more than 30 days.

Many worries came to mind: my father’s health, my little 3 year-old girl, and the reaction of my husband, friends, and family. I showed calm. That night I ate nothing. I tried to sleep. When I almost succeeded, some blows to the cell bars and the jailer’s shouts startled me. “54033, 54033!!!” I didn’t answer. When she opened the cell, the bitter woman looked at me and said “Girl, you don’t hear me calling you, or they gave you a beating with gusto.”

Then I remembered that I had in a small blouse pocket a little piece of cardboard that said “54033/201.” It meant my prisoner number and my cell number. One of the girls told me “now this is your identity card.” Meanwhile, the jailer told me to get all my things together. A little dazed, I began to fasten my shoes and she warned me: don’t fix up so much, you’re not going very far, you’re going to another cell. “Then I’m going to another cell,” I answered. This was my first night in Aldabó.