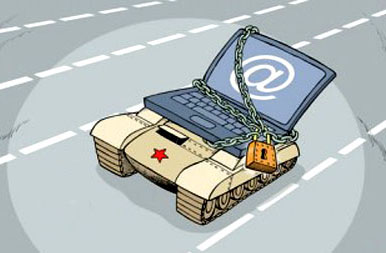 Few countries can compete with Cuba in the daily production of bad news. It’s a sad reality, which I wish I didn’t know, but a very true one: We have become competent exporters of unpleasant news, exceeded by only a small handful of nations.

So much so that more than one television station, more than one world newspaper, maintains its current news quota thanks to Cuba and its outrages. And we know that the good news of the world is not what fills the programs and opinion columns.

When I stepped on U.S. soil, for example, almost immediately the diligent producers of bad news sent me my corresponding dose: they suspended my mother’s email account that she had maintained for her duties in medical school.

Needless to say, her lack of communication with me, at the moment, is an effective weapon to punish me for my unacceptable attitude.

Now I have learned that the four letters that make up the name of my country, seen in headlines or pronounced by someone returning from a tropical vacation, rarely contain something like repeated scarcities, camouflaged dismissals, repression, prohibitions, strategies never accomplished.

This time, the dose of bad news comes to me from an incorruptible friend — a fearless chatterbox — who from a subsidiary of ETECSA (the only phone company in Cuba) in Santa Clara warns:

“They are taking away almost all the internet accounts of the workers. Not just in this company, but in others like Copextel as well. The argument is that there are too many staff with access whose work doesn’t specifically require a web connection. So as you already know, we probably won’t be able to talk any more.”

And I don’t know whether to be surprised, indignant, take it as a joke, or follow the most common route for those who don’t live on the Island: wash my hands of it while browsing, with complete freedom, any site I like.

But I still haven’t learned to do the latter, and therefore I say: What is frankly appalling is the capacity the owners of our Island display to change the pretext when the circumstances change making it necessary to rearrange the prohibitions.

Until recently, the stellar argument to justify Cubans’ inaccessibility to the Internet was more or less: “We have limited and expensive access, via satellite, because the American imperialists don’t give us access to fiber optic cables. So we must prioritize those most in need.”

It was never clear who determined the actual level of need between one citizen and another, or how to explain that only foreigners could contract for a legal connection on the Island, while a Cuban with money to pay for it could not.

But there we were.

But as it now happens, the “expensive satellite — limited connection — imperialist blockade” factor is about to disappear thanks to the work and grace of our sister Bolivarian Republic: From Venezuela a fiber optic cable has been docked in Playa Siboney since February 8, which will presumably solve the former problem.

What is the discourse now? What precise words, timely, studied, are repeated at the time of giving a social connotation to this new redeemer-cable?

Let’s look at the statements to Prensa Latina of Waldo Reboredo, vice president of “Caribbean Wide Telecommunications,” the Venezuelan-Cuban company that undertook the operation.

“The submarine cable will increase the current data transmission speed by three thousand times. However, laying the cable alone does not increase the Internet capacity in Cuba, since the deployment of connectivity is not resolved overnight because of the high cost of other needed investments.”

So what does this mean?:

“Our priority is to continue to create collective centers of access, in addition to strengthening the connections in centers of scientific research, education and health.”

Clearer than water: Let no one rub their hands thinking of normal access, for example from home. Let no one believe that this cable will offer free navigation for the disconnected. Let Yoani Sanchez hold off on launching fireworks from her 14th floor apartment.

Previously, the operating theater is prepared with full intentions: the new bad news, that more Cubans will lose their access to the network of networks, is not coincidence. As nothing is coincidence in my coincidental Island.

Let’s say it in plain English: The Electronic Battle has begun in Cuba, and the army is ready. How? Closing the cracks, the possible breaches, that the enemy could take advantage of. Andy account that is not demonstrably necessary, completely secure, must go down or it could be turned into enemy ammunition.

It doesn’t matter if it’s on ETESCA or Infomed. The priority is to secure the flanks. God save us from uncomfortable bloggers taking advantage of an account that’s not deactivated.

The broadcast — fortunately — of cyber-cop Eduardo Fontes’s lecture to the yawning Cuban military should not be interpreted as an isolated or unconnected event: It is the preparations, the preamble that tells us that the new battlefield (in his own words!) is the Internet. And in this direction they march, combative.

Yes, don’t you doubt it: Cuba is a strong contender in the world market for ugly news, bad omens. Little is heard of a million and more laid off workers. Little of stoning peaceful women dressed in white. Little of silencing, excluding, sanctioning, exiling. Now, the unusual: My Island in the Caribbean makes news because it has decided to use the Internet to not communicate.

Sometimes I wonder where such ingenuity, such wealth, comes from.