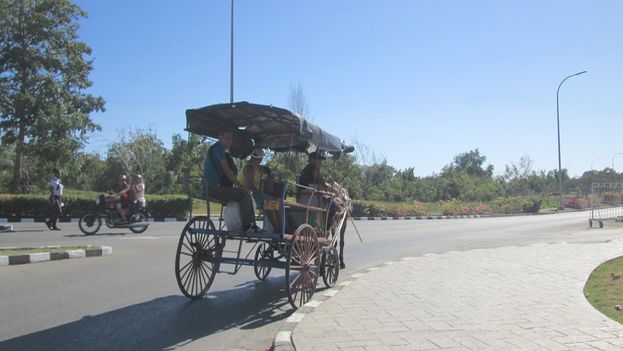 14ymedio, Yosmani Mayeta Labrada, Santiago de Cuba, 10 January 2017 — The hooves ring on the pavement in the middle of the night. The sun begins to illuminate Santiago de Cuba, where horse-drawn carts, trucks and motorcycles offer urban transport in an underserved market. But the measures introduced by the authorities in the middle of last year in order to preserve the city center have forced changes in the mobility of the people of Santiago.

The regulations, issued by the city’s People’s Power with the support of the Historian’s Office and police forces, range from parking bans to price caps on animal drawn vehicles. But the measure that most disgusts the citizens who do not live in the historic center has been the moving of the stands where the horse carts park from the centrally located Alemeda German Michaelsen, to the outskirts, next to the Santiago Train and Bus Terminal, near the San Pedrito neighborhood.

Coinciding with the restoration process of the Alameda and the streets surrounding the new malecon, the City Conservation Office has made every effort to restrict carts in the most central areas

For years, the routes from the previous collection point to La Barca de Oro and the old Havana Terminal, carried about 2,000 passengers a day, according to the calculations of several self-employed people who frequent the place.

Since the beginning of 2016, and coinciding with the restoration process of the Alameda and the streets surrounding the new malecon, the City Conservation Office has made every effort to restrict carts in the most central areas. “It had to be done to preserve the place because of its high urban and environmental value,” says one of the Office’s specialists, who prefers anonymity. “The horses defecated in the middle of the road and their owners did not outfit them with waste collectors,” complains the professional.

The neighbors of the area are among the beneficiaries and applaud the measure. Maria Antonia Reyes, who previously had to clean in front of her house “when horses urinated” is now satisfied to be able to breathe “cleaner air.”

The pedicabs have been favored by the new regulations. “There is no shortage of customers, we have one after another and at the end of the day I arrive home with more money,” says Manolo, one of the drivers of these bicycle’s designed for public transport.

But the people of Santiago, who had favored horse-drawn carts as an alternative to the poor bus service, have fewer opportunities for internal mobility.

“The Alameda was a point from where it was easy to go anywhere,” 14ymedio is told by Norge Gonzalez, a cart driver with more than 15 years of experience. “In less than ten minutes the cart was full, but now people prefer to take something else because of the distance to the coach stand,” he says.

Another of the provisions that have fired up the cart drivers is the imposition of capped prices, which were set at two Cuban pesos (about 8 cents US), three less than what was charged previously. Offenders can be punished with high fines or even confiscation of their vehicles.

Against this background, some of the coachmen have proposed to stop work for a couple of days, as a way to pressure the authorities and to get the measures repealed

Given this situation, some of the coachmen have proposed to stop work for a couple of days, as a way to pressure the authorities and to get the measures repealed. The lack of organization of the union and the fear of a massive withdrawal of licenses, however, restrains any initiative of protest.

Self-employment regulations include a license for those carrying “freight or passengers with their own or leased means using a horse drawn cart,” an occupation of particular importance for mobility in rural areas, where up to 80% of passengers travel in this type of vehicle.

The discontent in the sector over the latest measures taken in many municipalities has been noted throughout the island since last year. In November, the coachmen in the municipality of Mayarí in Holguín, shut down their work in protest against the imposition of price caps on the part of the authorities, who from 1 October onwards forced them to cut their fares in half.

In July, horse-drawn cart drivers in Placetas, Villa Clara, went on a strike after being warned by local government officials that their routes would be moved to another area, outside the downtown areas of the city.