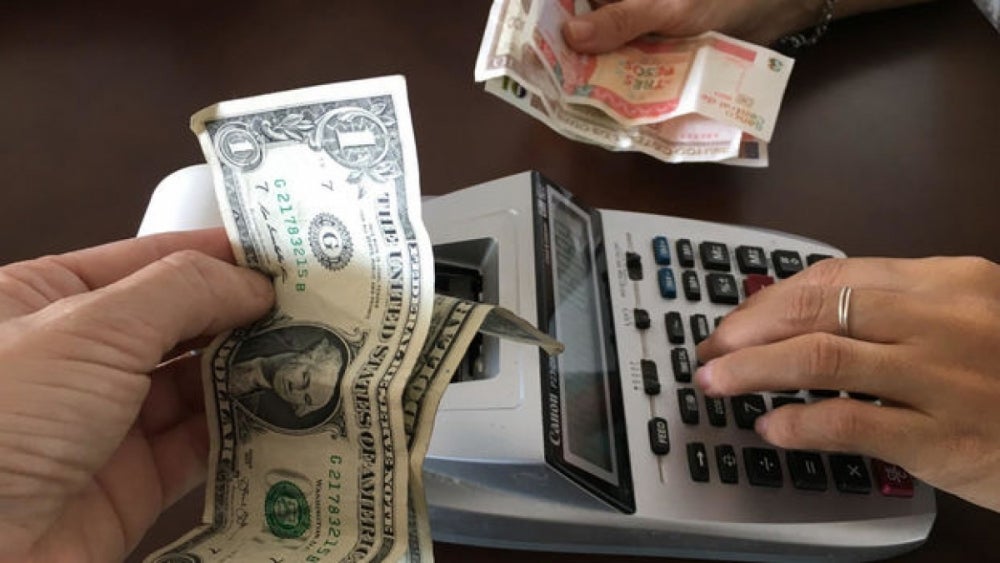 Cubanet, Miriam Celaya, WEST PALM BEACH, United States. – The highly announced Roundtable TV show on Tuesday, 15 October 2019, where the “new economic measures” of the Cuban government were revealed, has just deflated any expectations that those who were waiting for some opening in the internal economy of Cuba might have had.

This time the cast was headed by Salvador Valdés Mesa, the brand new Vice President of the Republic, accompanied by the ministers of Economy and Planning, Alejandro Gil Fernández; Finance and Prices, Meisi Bolaños Weiss; Internal Commerce, Betsy Díaz Velázquez; Foreign Trade and Foreign Investment Rodrigo Malmierca Díaz; along with Irma Margarita Martínez Castrillón president and minister of the Central Bank of Cuba, and Iset Maritza Vázquez Brizuela, the first vice president of the CIMEX Corporation.

Taking into account the profound structural crisis of the system and the uncertainty of the lives of Cubans in pursuit of a promised future of prosperity, which remains increasingly distant and elusive, one would expect that such a choir would have deployed a whole package of reforms aimed at liberating and stimulating, to some extent, the initiative of the repressed private sector, in order to alleviate the state of the permanent asphyxiation in which the majority of Cubans live.

Far from it, and validating once again its proverbial folly, its lack of sense of reality and its total indifference to the hardships suffered by the governed, the news released this Thursday are far from “favoring the people,, and much less are they directed at improving the standard of living of the population, as stated by the conga line of the Palace of the Revolution.

In reality what it is about, is to turn on a twisted financial machinery, fundamentally guided to collect foreign currency from abroad, thus avoiding the tight fence imposed by the iron Helms-Burton Law against the Castro cupola.

The excuse wielded by Castro’s birds of prey could not be more childish: the increase in domestic demand for consumer goods has led to an informal trade where products are offered at high prices, which leave copious profits to natural persons, even after paying the corresponding customs tariffs on the goods they import. Regarding this, Mr. Valdés Mesa has said: “Although the goods enter the country in a framework of legality, after receiving them they are marketed irregularly.”

In addition, he stressed that “the current US administration has also intensified the financial fence to prevent Cuba’s transactions in its collections and payments abroad,” factors that “have caused the country to lack sufficient financing to import raw materials destined for the industry and for our market supply chains.”

Thus, the informal market — the official vultures confess — has compensated for the usual shortages in the retail network, supplying those goods that the official market does not offer or that it does offer but at higher prices. Therefore, with the sagacity that characterizes it, the government has been “working with a strategic vision” to develop a plan that allows expanding the available goods, establishing “competitive prices” and “developing our industry,” while facilitating Cubans’ purchasing ability.

It is worth stopping at certain interesting details: for the first time the almighty State recognizes informal merchants as competitors, and pretends that we believe that a mechanism as precarious as that of the underground commerce – merchandise stands, street vendors, traffickers, the on-line site Revolico, etc. — and its primitive import system through the so-called mules, has exceeded the commercial capacity of all the economic-financial machinery of the Castro regime, that murky monopoly known as GAESA (Grupo de Administración Empresarial, SA*), forcing the government to create a trading system parallel to its own network of retail trade, collector of foreign exchange.

On the other hand, the subterfuge that the State seeks to diversify the goods on offer and lower prices for the benefit of the people does not hold, because if it were the real objective it could reach it through the existing retail network, supplying shops and lowering the inflated prices of the products.

What is involved, then, is not to snatch customers from the informal market, but to create a system of direct currency inflow to the government, thus circumventing the pressures of the US embargo and especially the effect of the measures dictated by the Trump administration. To achieve this, the State’s profits must not be in the Cuban convertible peso, CUC — that bastardized internal token that only works in the home front — and even less in the Cuban peso, CUP, 25 times less valuable, but rather in cold hard cash (read ‘dollars’).

Based on this, it was decided to authorize ‘natural persons’ to conduct sales in convertible currencies and to import products through state-owned companies, for which the “thinking tanks” of the government conceived a new mode of payment in currencies through the Central Bank’s financial system of Cuba (Banco Metropolitano (BM), which operates only in Havana; the International Financial Bank and the Popular Savings Bank).

The customer – the natural person – will also be able to make purchases at “favorable prices” in the new network of retail stores that will operate throughout the country and will be “opening” in time, until a total of 77 are completed. In this first stage and starting next Monday October 21st the first 13 stores (12 in Havana and 1 in Santiago de Cuba) will open, the rest will be implemented “gradually.”

Likewise, the measures will allow natural persons to import goods through import companies designated by the Ministry of Foreign Trade and Foreign Investment, provided that the payment for such imports is backed by freely convertible currency, for which existing “customs warehousing areas ” will be used, in addition to others that may be created, for the sale of merchandise through importing companies designated by the Ministry itself.

For their part, the state entity Automotive Services, S.A. (SASA), the CIMEX companies (“and others that may be necessary”) will provide marketing services for parts, accessories and other multi-brand automotive products to natural persons. As an additional benefit, bonuses or tariff exemptions will be granted for the importation of raw materials and supplies as well as for dire need items and products in greater demand.

None of these measures will affect existing customs regulations, which will maintain the limitations and tariffs on already established imports.

All purchases and transactions will be made under the electronic commerce mode — with virtual stores, online sales and the use of national and international payment gateways — so it is absolutely essential that the buyer create an account, in foreign currency only, in any of the banking varieties that function in the country to obtain his magnetic card, which will be used for each transaction upon presentation of the buyer’s identity card.

Permanent residents in the country may open accounts only with the presentation of their identity card. These accounts must be associated with magnetic cards in the offices of the Metropolitano SA, Credit and Commerce and Popular Savings banks, and among the attractions offered to them are the waiver of a minimum balance, plus that interest will not be calculated or applied, while limits to the amount and number of transactions per day may be defined, which constitutes “a security mechanism for the customer in case of loss or misplacement of the card, which can be changed at any time.”

And since all this machinery is designed in the interest of attracting the maximum possible currency, these bank accounts can receive funds through transfers from abroad, including remittances that until now were processed against bank accounts, as well as cash deposits in American and Canadian dollars, Euros, Pounds Sterling, Swiss francs, Mexican pesos, Danish, Norwegian and Swedish Krone, and Japanese yen.

Deposits in Cuba’s national currencies, the CUC and CUP, will not be accepted. The exchange rate that is applied will have the US dollar as a reference value, and in case of US dollar cash deposits, a 10% tax will be applied, as established in Resolution 80 of October 23, 2004.

The government hopes that retail sales in freely convertible currency will allow the revenue collected to be translated into the development of the national industry — without specifying what these industries will be — to guarantee the sustainability of the supplies, boost the economy, satisfy domestic demand and generate jobs.

In addition, Valdés Mesa said that the new measures will improve both the after-sales servicing (warranty) of household appliances sold in the national market, as well as repair and maintenance servicing, a benefit not offered by the equipment imported by the buyer. “The prices that will be offered will be competitive with those existing in the retail market of the countries of our geographical area. They will not be fixed prices, but they will not be collectible either,” he added.

However, a brief glimpse of the “favorable” prices of “high-end products” through several examples offered by the Roundtable allow us to anticipate that they still do not conform to the reality of common Cuban’s purse, and that the welfare of many families will continue to depend on remittances. Thus, a 43-inch Samsung LED TV is priced at $549; a 13.6 cubic foot Daytron refrigerator at $519; a 1-ton Royal brand ductless air conditioner at $361, among other examples presented.

Clearly, these numbers do not relate to the income of the poor majority of the Island, so it is the government itself that widens the gap between Cubans with access to consumer goods and the vast majority that remains in a permanent state of survival.

The officials, in general, were profuse in details and in financial terminology that failed to show an understanding of the common of mortals in Cuba, and also extended in tariff matters, transactions, types of cards, benefits of bank accounts, etc. They could well have explained it in Mandarin Chinese, since knowledge of financial management, which they generally lack, is not precisely the strength of most of the natives of the Island.

What was clear to everyone who had the patience and discipline to watch this Roundtable from the beginning to the end is that there are still no effective measures for the millions of disadvantaged, low-income Cubans without access to remittances.

Gone and buried is that slogan that years ago made a revolution famous.  It went like this: “of the humble, with the humble and for the humble.” Now the greedy Castro regime will only have to sit down and wait for the unsuspecting people who will bite the hook and commit the supine stupidity of placing their capital and their confidence in the dark banking system of Cuba. Those naive people had better think twice.