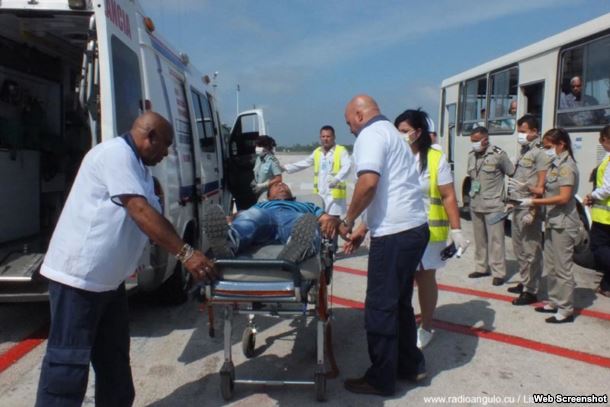 Juan Juan Almedia, 8 September 2016 — A commission put together by senior management from the Ministries of the Interior and of Public Health in Cuba has released a report that enters into evidence the origin of the entrance of the Zika virus into Holguín Province.

“Soldiers and Doctors,” a paraphrase of the title of the book by Carlos Loveira, matches a chain of avoidable oversights and violations, committed in the service area of airport security.

“There are videos from the airport cameras showing the guys who, instead of paying attention to the temperature scanner, left to carry luggage in order to get tips from the passengers on international flights.” An officer tells me this unabashedly, and, on cue, he prefers to remain anonymous.

“By doing this,” he continues, “they neglected epidemiological vigilance and Zika came into the province of Holguín. But, apparently, they already took the measures required by the authorities of the Frank País International Airport, and they expelled those implicated, who are at the disposition of the competent body, because their failure to perform their duties facilitated the propagation of this illness in the province.”

My interlocutor says, “The miserable salary that the customs agents receive and the lack of incentives for those in charge of looking after border security was what really provoked the failure or negligence in airport protocol, permitting someone infected to come into the Holguín region, and the later development of new ’autonomous’ cases that, as you know, are residents in the city of Holguín who have never traveled abroad.”

A doctor in the province with authority on the subject added, “Now what is most worrisome is controlling the vector, meaning the mosquito, Aedes Aegypti. Although they are taking precautions to identify the possible existence of new cases and are studying the viability of taking samples from animals and/or humans in order to develop vaccines, in addition to coordinating health actions with various institutions and raising the consciousness of the population with vigilance and vector control, all these things seem to be insufficient, because we still have it here and we know that the mosquito is changing its usual behavior.”

This past February, the World Health Organization declared the Zika virus a world health emergency.