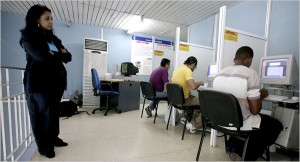 In the year 2000, in a long, narrow cubicle of the National Capitol, the present seat of the Ministry of Science, Technology and Environment, an Internet service at 5 dollars per hour was authorized. At that time 5 dollars was a little more than half the minimum wage in Cuba. The service was agonizingly slow. Its main use was for email. If you were lucky, you could get some world news.

Sending photos was a real pain. Beginning in 2008, all Cuban citizens could log onto the Internet from Havana hotels for a fee ranging from 6 convertible pesos (CUC), about 8 dollars, to 10 CUC (12 dollars) for one hour of navigation.

The connection is still slow but better than that of the Capitol building. Now, with the arrival in February 2011 of the famous underwater cable linking Cuba with Venezuela, Ecuador and Bolivia, in a bizarre digital entente that people in the street called Alba.net, the speed of data transmission has improved qualitatively.

But it’s nothing to write home about. In an hour you can transfer photos and some small video that does not exceed 40 megabytes. Anyway, before you upload photos and videos, you must compress them on your computer at home because you run the risk of using up your hour of connection time without being able to upload the material.

That is, by paying in hard currency you can get on the information highway. That’s the good news. Let’s look at the bad. Virtually speaking, Cuba is an island split in two. Outside Havana, Cubans are not allowed to connect to the Internet in tourist facilities that have that service.

You have to show your passport. Just ask the troop of hard-working independent journalists from the central and eastern provinces about the difficulties they have in posting their stories and articles. In Santiago de Cuba, you can get into the Hotel Santiago, although at times the hotel security makes it impossible. People who live in Havana are “privileged.”

The other major problem is the high cost, which makes it practically impossible for most reporters and bloggers without an office. Not all independent reporters earn money for their writings in Cuba. And those who do receive between 25 and 100 convertible pesos per month, barely enough to let them survive.

Most connect to the Internet once a week in one of the two places provided in the United States Interests Section (USIS), next to the Havana seawall. A service that not only is offered to dissidents: intellectuals sympathetic to the regime also connect from there. Other dissidents do so in western embassies like the Netherlands, Sweden, Poland or the Czech Republic, which offer two hours a week free.

Connecting to the Internet is the biggest problem with alternative reporting in Cuba. And from what I can see, it’s going to get worse. The picture doesn’t look good.

According to reliable information, a crippled Internet service is being designed, scheduled for commercialization in late 2011. A kind of Intranet, where users can access only local sites and others that the government considers not harmful to its interests. This one would have access to international mail like Yahoo or Gmail.

There is talk that the installation of a DSL line by ETECSA would cost 150 convertible pesos (170 dollars), and the transmission rate would be more than 120 kilobytes, nearly double the current one. The amount would be paid monthly, according to the number of hours. It’s a feasibility study.

We’ll see what the leaders decide. The tide of events in north Africa keeps them on tenterhooks. The Castros recognize the mobilizing force of the Internet and the social networks. And they fear it. It would not be unrealistic to think that when the Internet – or the Intranet – is commercialized on the island, the virtual police will come later, in the style of China. The same or worse.

The other issue of concern, big concern, is an information law that the ideological Talibans have kept in the drawer. If implemented, it would be an appendix to Law 88, the gag law, the same that led to the imprisonment of 75 dissidents in the spring of 2003. It has been leaked that said law will regulate and penalize the use of the Internet. Tools like Facebook or Twitter, or any use that the Castro government does not consider appropriate, could lead to a criminal penalty. Let’s hope they won’t lower the boom.

The fears of the regime and the restrictions, in addition to restricting a handful of civil and political liberties, are dynamiting the future of a generation that also was born in Cuba under the domination of the @.

Some hotels and prices

In the Hotel Saratoga an hour costs 10 CUC (12 dollars). For two hours you pay 15 CUC, more advantageous. You have Wi-Fi for 24 hours. Three PCs offer service from 8 am to 5 pm. If you go with your laptop and a card previously purchased from the hotel, you can connect at any time.

The fastest connection is in the Melia Cohiba. The speed can reach 120 kilobytes. One hour costs 10 CUC if you use the terminal in the hotel. If you want Wi-Fi, you have to pay 12 CUC (15 dollars).

In almost all the hotels in Havana the price fluctuates between 8 and 10 CUC per hour for the Internet. The speed has improved. But not enough to upload large files or videos.

In Old Havana there are hotels where cards cost 6 CUC an hour, but the connection is very bad. They also use a software called Avila, which is rumored to be a spyware program that copies your email account or the password for your blog.