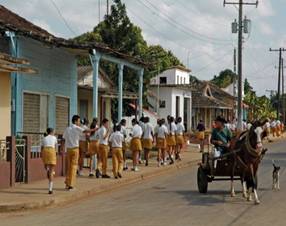 When the state-run media writes or talks about education in Cuba, they always start with the obligatory preamble, discussing how bad things are in the rest of the world, including in so-called first-world countries. They then go on to discuss the encouraging situation in Cuba, where students are guaranteed free education as well as health care, nutrition and other basic services. Those of us who suffer under Cuban socialism, however, know that things are not quite so simple.

If, in the early days — and I’m referring only to education — taking advantage of the  facilities, the physical foundations and the existing licensed teachers, it was of high quality, the fact is that very soon, with the advent of failed educational experiments and other changes, the quality began to decline. Schools for teachers were closed, replaced by training in inhospitable environments in an effort to strengthen revolutionary commitment. Quick courses were taught in short time spans. Poorly trained personnel were allowed into the system. Televised courses replaced teachers in classrooms. The schools in the countryside program was introduced. As a result of these and other changes, a large percentage of good teachers are now at retirement age. Competent newcomers do not exist and replacements are not foreseen given the lack of interest among young people, who are attracted by the greater incentives and better working conditions offered by other professions.

In addition to its well-known and difficult material and pedagogical problems, the Cuban educational system has not been able to train the citizens the country needs and will need over the short and medium term. An attempt to emphasize politics and ideology at the expense of education has distorted Cuban teaching, which had always enjoyed respect since the era of Félix Varela, José de la Luz y Caballero, Martí, Varona and many others. This has led to a critical loss of values, which is palpable on a daily basis in the streets of our cities and towns, and which is shared equally by different generations. The teacher-student-parent relationship has been broken for many years, abrogated by the state monopoly on education. Trying to restore it now is no easy task, especially when, instead of emphasizing the formation of citizens, there is an ongoing emphasis on the formation of “patriots,” which is understood to mean those who are loyal to “the model.” They are trying to rescue the “system of revolutionary values” when in reality what they should be trying to rescue is the system of national values, which are much more important and significant than the former.

In a social scenario of absurd and archaic constraints imposed by those in power, there is little that teachers can do (if they act as such and not as mere transmitters of a failed ideology in which even they themselves do not believe). The same is true for parents and the rest of the family, who are also obligated to engage in a double standard, known as the “dual morality,” which is really a lack thereof. Faced with this reality and trapped in the middle of a tense situation, the only path left for a student is escape, either through alcohol, drugs, exodus, or through individual or group rebellion as part of one of the many current urban tribes (such as emos, rockers, rappers, reparteros* or skaters).

I feel that, rather than organizing and staging large events to show the world the “achievements of Cuban education,” efforts and resources should be spent on addressing the real situation, which endangers the national identity and directly threatens the country and its very existence.