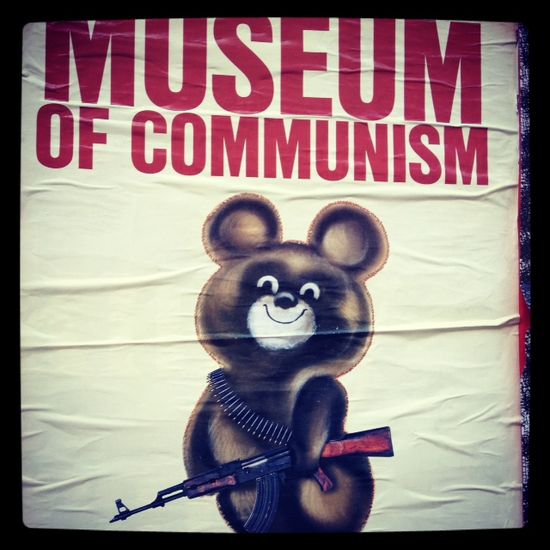 I froze my ears off  in Prague and from the window of the number 14 tram I could see Misha, the little bear holding a Kalashnikov. I immediately remembered this icon of the 1980 Moscow Olympics and the entire sequence of animated cartoons he starred in later. Those were the days when Cuban children knew more about the Russian tundra than the countryside of our own nation, more about wolves than hutias, more about apples than oranges.

The era when the Kremlin was a constant presence in our lives, with its soldiers, its technicians sent from thousands of miles away and its subsidy so fat it allowed some extraordinarily wasteful spending on the part of Fidel Castro. All this passed through my mind in a second as I read the announcement that this particular display promised a trip to the past through the aesthetic promoted by the USSR.

At a set time, as with all events in the time I spent in the Czech Republic, I went to 10 Na Prikope Street to take a look at the museum. The first surprise was at the entrance, where the woman who was selling tickets had the courtesy to let me pass free, due to the fact—she explained—that I came from Cuba. Given the closeness of the objects in those rooms with my reality, I could enjoy the tour free of charge because in the end it was a journey through my own daily life. Why should I pay for the ordinary, for the usual, for exactly how it is?

While I observed the wonder and giggles of other visitors, I looked at the red flags, listened to the Internationale, and passed by the statues in glorious poses with a familiarity immune to amazement. It was like attending an exposition of gadgets from my kitchen or the underwear in my drawer. Nothing had the character of a museum piece for me, as I live a scenario were each one of these objects or ways of speaking and presenting an image are still present for me. A journey to the same, an excursion to the known and so often experienced. A museum of the past, for this traveler coming from the same remote time.

Closeness, however, is not always synonymous with comfort. So as I advanced through the rooms a feeling of strangulation came over me. The medals, the farmer with a raised fist, and the ugly cans of jam with colorless labels. Everything contributed to an itch that started on my face and spread under my coat to my whole body. Barely two weeks after leaving Cuba, I felt a marked allergy to everything. There were the military uniforms with the peaked caps that our officers mimicked for decades. The insignias for outstanding workers and soldiers killed in the war, so identical to those given out in our own country that I had to look twice to convince myself they didn’t say “Republic of Cuba” rather than USSR or RDA.

So, advancing between the posters in the worst style of Socialist realism I came to a reproduction of a KGB office. The rough phone, the metal files with each drawer labeled with a letter and the files within. Little pieces of cardboard stained by time with the names of the spied upon. The catalog of the “inconvenient” citizens, of the critics who were once the targets of the political police.

I was tempted to look for “Y” and delve into the files in search of a name. But at that moment the feeling of asphyxiation the Museum of Communism gave me reached an unbearable point and I ran out into the street to take a breath of Prague’s air, cold and free.