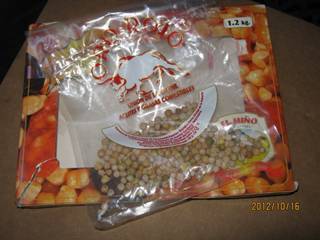 My grandmother would often turn to a common saying to reinforce an argument. I also had a philosophy professor—a very good one, to be sure—who used to say that all wisdom had been summed up in a popular book of Spanish proverbs, and would begin his classes by “tossing into the air” one of the sayings that had a lot to do with the subject of development.

But this is not about that since, every day now, more and more people are no longer resigned to all the calamities heaped upon them because, as the saying goes, they are no one’s fools. On this occasion a friend, Mariza, came to see me and brought some evidence of what had happened to her for me to write about on my blog.

Last weekend she had managed to get her hands on a few convertible pesos. For the pleasure of having some garbanzo beans to share with her family, she went to the Caracol store on 26th Avenue in Nuevo Vedado to buy a box that contained a couple of sausages, a piece of ham and a package of garbanzos to make a nice cocido. According to the instructions on the label, all you had to do with this product was add it to the pot, heat and serve. Since the product was Cuban, from the Oro Rojo brand (a division of the Union of Meat, Oil and Edible Fats), she was wary and proceeded to choose the garbanzos that came separately, but in a clear plastic bag inside an outer package.

Imagine her surprise when she began seeing peas mixed in with the garbanzos, many of them rotten, which she discarded. Not to mention the tiny bits of sticks that were included in the contents. She brought all this evidence to me, carefully collected, in the same package that appears in the above photo.

She also handed me the box—now open and empty, of course—and the bag with all the discarded items she had separated out. On one part of the box it read, “Best consumed before (no date). Manufactured by the Tauro Meat Company. Packaged October 10, no. 852, Havana. Ten servings, 100g per serving.”

The contents barely provided six very modest servings and cost almost 8 CUC, the equivalent of some monthly salaries. The price varies depending on where you buy it — a few cents more here, a few less there.

Now tell me. . . Wouldn’t it have almost been cheaper to go to a privately-owned restaurant to have a good garbanzada without so much aggravation? I can assure you that this misery, which afflicts many people, will be loved by certain company. This is not the case with my friend, who is no one’s fool, nor with a large number of Cubans who have to put up with it, or so it sometimes seems to us.

*Translator’s note: an equivalent translation of the Spanish proverb mal de muchos consuelo de tontos, or more literally “the misfortune of others is a comfort to fools.”