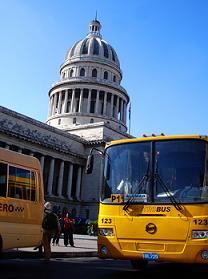 Curious to know why the people in Havana speak so ill of these services, I asked the impatient passengers: how frequently do they run? how long do they take to get there? And to various drivers of the vehicles, about the contracts the cooperatives use to lease out the buses.

A driver on the Parque del Curita Micro X line – who didn’t give his name – answered me: ” I do about 16 journeys a day, the microbus has 25 seats, and the fares for them to go to the CNoA (Non-Agricultural Cooperatives), 50 seats for the total return journey, or say 250 pesos. The fare is 5 pesos (CUP), equivalent to 20 cents.”

The driver continued: I carry more than 800 passengers a day, I collect about 4,000 Cuban pesos (equivalent to $160).  In 24 working days I hand over to the association, not less than 96,000 pesos ($3840). First I pay over what is due to the cooperative, which leases me the vehicle, the difference, or what is left over, goes to the drivers, because we are the semi-owners of these microbuses. Did you know we have to repair, clean, and cover the cost of maintenance, for which we have to pay third parties and the CnoA itself?

Another driver went further than his colleague: “After paying the association, I am left with some 1,200 pesos ($48), because as I am going along people get on and off. Those receipts don’t go to the CNoA; we keep them for our costs, because we are driving piles of old junk.

I could recognise that the micro’s driver, as well as his own income, receives about 600 pesos a month from the cooperative ($24), as profit share for being associates.

Liliana Ezquerra, vice president of the Provincial Administration Council of Havana, recently emphasized to the media: “When the two transport cooperatives started operating, using vehicles rented from the state, the number of passengers in the capital increased and at a lower fare than the private drivers charge.”

One passenger in the Micro X Alamar told me “It’s 8:50 in the morning, I waited 40 minutes for the bus, they arrive here when they feel like, come to fill up with fuel and hang around to go back again or to start their working day. They take time having a snack – how should I know?! The bottom line is, it’s a disaster. They may be cheaper than the privates, but I can’t rely on them to get me to my work on time.”

Another passenger told me: “There is no fixed time for them to start work; but nevertheless the pirates are in the street at 6 in the morning, and at 12 at night they are still providing a service; I don’t even want to talk about the public buses, you can’t even count on finding one at 7:30 at night.”

The third passenger, irritated, assured me: “Look, a microbus just got here and it got lost more than 30 minutes ago. Just so you can see. Look, there it comes, who should I complain to if now they are the owners?

As for me, I took a photo of the delayed bus, because I also spent more than 30 minutes waiting for it.