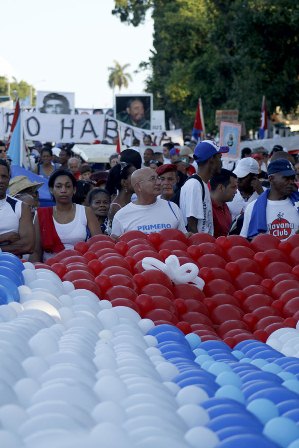 “When the Lord restored the fortunes of Zion, we were like those who dream…” (Psalm 126)

A friend of mine once wrote an article about the mania of totalitarian power for anniversaries, as we know it in Cuba. It seems that parceling out the calender in this way offers some security to our captors.

In the building where I live signs have started to appear to “invite” the neighbors to go to the Plaza on May Day. You can hear the music of the Communist Internationale on TV. Even some foreigners on the news say they’re happy to have come to Cuba expressly to march on Labor Day. In all the countries where they marched and are marching as an official celebration on May Day, they have also prohibited people from freely entering and leaving the country, among other miserable restrictions. But these Communists of the world don’t care.

So it is, there are still people who believe in this life. At the school they have already hung the sign in the doorway that says: “Defending Socialism.” It’s true that hanging this and other posters is a mechanical act, under higher guidance, and to not do it would be an act of rebellion which to many seems inconvenient, without knowing that they are wrong. I’m not saying that everyone is lying to themselves, but I am saying that most people are, and that is why there is so much surveillance, so much ideological campaigning, so sad.

But there is something new this May Day, although I still don’t know the security source (Ecuador, Venezuela, the Vatican?) that engenders such pride in the Castro dynasty’s dauphin, who according to the news threatens to do the same as with that “other May Day,” which was the Pope’s Mass in the Plaza: arrest, detain, prosecute and threaten the rebellious Cubans who remain in this country.

Much has been said about people in Cuba being reluctant to say what they think, what they like, what they desire. But I am going to have to say it one more time: with regards to May Day, when you hear the same bewhiskered speaker who decades ago gave the same speech about the success of the March, with the people supporting its caudillos, covered by the great press agencies of the world, I know I also noticed the falsity of every representation.

In the ’80s my parents took me to the Plaza, I remember the atmosphere and the sensation of being in compliance with orders and in consequence being approved and making others happy: doing what is expected of you. I did not see, then, the workplace lists where not attending could have unintended consequences. Or simply the pressure that Cubans saw themselves subjected to daily and that produced the inertia of the March.

Such that there was at least one year in which the government didn’t call “the people” to march, because perhaps that year people would have gone on strike by not attending May Day.

I’m sure that neither of my parents saw how unhealthy it was to take me to be one more component of this tide of not being. I think people fear, above all, losing something, their work, if they decide not to go and stay home and do what they want.

Also there are the old Communists, lovers of Picasso, intellectuals who continue to believe that to be a Communist is to belong to some vanguard, and that simplicity seems to me to be irresponsible, immoral.

Those who will later be accused of “corruption” also attend May Day. And in the cases I’ve heard of, not about the higher-ups but those about simple ordinary workers, they have more to do with the alleged diversion of food and sandwiches and soft drinks; but even though other proletariats see the fate of their colleagues and yet continue to gamble for food, they go to the marches to salute the owners of the country with their banners.

A strange thing, the exploited salute the exploiters, who have made them believe or demanded, under terror, that they pretend to believe, to themselves and to the whole world, in some grand ideas that do not serve real happiness, nor the feelings or identity of anyone.

I insist that if God wants, and prayer is a very powerful weapon, all this can change from one day to the next.

The only people who could be happy with the parade of renouncing the most authentic happiness, as every Cuban who goes there has done, are those to blame for this existential tragedy; and still it is possible they may not be entirely happy knowing that what beats in the heart on the other side, behind the bars where everyone has imprisoned their desires, is the end of this farce.

One more year we say the same thing, perhaps next year we can tell another story on May Day. For this I am asking a lot of God and I know we are going to have an answer. I know.