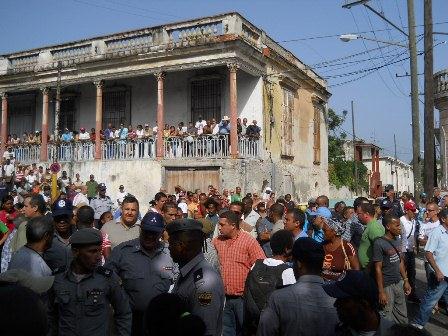 In one of those programs that State Security shows on Cuban television, I have seen one of the men I most admire for his courage in this saga for the freedom of Cuba. But State Security did not really present Antúnez, nor speak of his years as a political prisoner, of the horrors of Cuban prisons, so dark and forgotten.

Jorge Luis Garcia Perez “Antúnez,” is a Cuban who was imprisoned from 1990 until a few years ago, solely for expressing his ideas contrary to political power.

If he had only been in prison for spreading his ideas it would be terrible injustice, but in his testimonies of Castro’s political prisons, you can relive the horror of the punishment cells, and of human beings reduced to the most unimaginable degradations to make them retract who they are, forcing them to wear the uniform of common prisoners and making them go through political re-education courses.

Someday Cuba will be on the front page of newspapers around the world because of the trials of violators of human rights we will then be able to hold, for the crimes against humanity in these 53 years.  The world’s radical left, extreme, carnivorous, predatory, wanted to ignore them, perhaps because they would be willing to do the same in their own countries. To speak of this is difficult, to imagine how far the wickedness of man goes, begins with a closed door we don’t want to go through.

Possibly because of this many influential people in the world prefer to look at the uniformed children, the waving flags, the doctors graduating from the Latin American School of Medicine, the discourse of social justice. And this apparently been very well studied by the elite of power in my country.

The world prefers to ignore the testimony of people like Valladeres, Hubert Matos, Antúnez, the 75 of the Black Spring. And meanwhile State Security fabricates these programs where they try to discredit people largely unknown to the Cuban television audience. Maybe even for Cuban and foreign journalists themselves, excepting of course the independent journalists and some disobedient foreign correspondents who decide to seek out the truth and not remain within the comfortable official discourse.

The only thing the mafia of Villa Marista (a political prison), and Section 21 (an arm of State Security), achieved with their latest monstrous documentary was to show, once again, how they monitor and persecute people who have spoken out against the regime.

In response to the lie with which stupid people try to establish people’s perception of State Security, reducing the problem to an issue of money and not authentic freedom and rebellion, I answer in my blog — so that anyone in Cuba (where I live and where I have come out of my closet) could read me — saying that in order to go out into the streets to protest and to demand freedom for the political prisoners, as the Ladies in White do, requires so incredibly much more than money.

To land yourself, as Antúnez did (and as other Cubans did whom they also try to discredit for being opponents) in a cell of the Castro regime, in solitary, without rights, you need to have an I-don’t-know-what that most Cubans don’t have. That the State Security officials who made the TV program don’t have, nor do the guards who inflict tortures on the prisoners, especially those who torture the political prisoners with cruel and degrading treatment.

Not even the maximum leaders who die of fear have it, those who are the primary culprits of these injuries against humanity, fostered by the ideology of a system and the low value of a human person within it; these are the conditions without which the current owners of Cuban could not remain in power.

In the first centuries of Christianity the greatest testimony one could give of faith in Jesus Christ was martyrdom, and Antúnez has proven to the point of martyrdom his faith in freedom: he is alive and sane thanks to the spiritual force God gave him. (Boitel Lives is his book of testimonies from his years in prison in Cuba.)

In the case of those endearing gladiators, the Ladies in White — who also showed up on the TV screen in violation of their right of privacy — the major “sin” that State Security presents was their having accepted collaboration from other Cubans in exile, who knows if perhaps it was another Lady with better rhetoric, to write a statement on the death of Oswaldo Payá.

These women, mostly from humble backgrounds but with a true intelligence, have chosen the better part of what no one in exile, nor many men in Cuba, nor this writer, have chosen, which is the courage and stamina to go to the very end, as Laura Pollán did, in their fight for Freedom for the political prisoners.

Faced with the lack of justice and citizen security in the Courts, after learning that the power in Cuba is a fierce dog that calculates his moves without any respect for the human condition or the condition of being a woman, they need a lot of courage and a lot faith.

When freedom is in danger, it must be rescued. The only ones who have sold their individual freedom, and hence their country, have been the mercenaries of the present government of the Island of Cuba, the sadistic gendarmes of MININT (State Security), who with no fear of God nor respect for men, populate the memoirs of Antúnez, the hellish conditions that Cubans and many people in the world prefer to ignore. And that, one more time, the official government site Cubadebate did not comment on, nor was it presented on television by State Security.

Translator’s note: A line from this  song by Joaquin Sabina