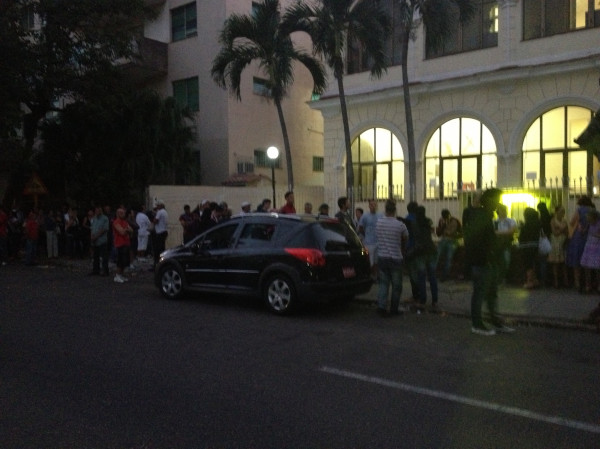 From the early hours of Sunday large groups of people were already visible at the Department of Immigration and Aliens (DIE) in the city of Havana. A few hours before the Migratory Reform announced last October was to go into effect, Cubans vacillated between hope and uncertainty with respect to the new law. Decree-Law No. 302 significantly simplify the paperwork required to leave the country, and also reduce the costs. However, doubts about how the reform will be implemented in practice feed rumors and speculation.

The elimination of the “White Card” — as the long-standing exit permit is called — is the most important improvement that takes effect on Monday. Before, Cubans were required to ask for authorization to travel, now the act of receiving a passport is what is required to cross the national borders. To process the thousands of applications the authorities have also called on the offices that make identify cards.

The vast majority of Cubans look with relief and hope on this new law that facilitates emigration without severing ties their native land. The amount of time a Cuban can spend abroad has been lengthened from 11 to 24 months, which widens the possibilities for contracting to live and work in another country without losing the ability to return.

Roberto Cortizas, who joined the DIE line in the Plaza of the Revolution municipality very early, confirmed his intention to maintain residence on the Island. “I want to go to Brazil, where I have a brother with a small business, and work there. So I can send money to my parents and come back to buy a nice house here.” Precisely that economic emigration seems to be one of the objectives of the Migratory Reform. Given what the country is going through right now, it is urgent to increase the flow of hard currency remittances coming in.

Others, however, await the implementation of the new flexibilities to leave and not return. “Me, I’m here, and it’s not for visiting,” said a young man who requested anonymity as he waited outside the Identity Card Office in the Cerro municipality. Like him, many have begun a process of liquidating their property and settling their affairs in Cuba, pending the moment on Monday when the Island’s locks will be opened. This trend has brought an increase in the number of houses and cars for sale, and reservations for plane tickets have soared in recent weeks.

With Decree-Law No. 302, the Cuban government has handed off onto foreign consulates the problem of emigration. Although in a few hours it will be easier to leave the country, no new flexibility has been seen in obtaining visas to the United States, Europe or the rest of Latin America. Still, Cubans have taken on the task of compiling the list of nations that do not require a visa from natives of the largest of the Antilles. But one cannot exclude the possibility that this Monday a “legal Mariel Boatlift” will begin, given the ingenuity shown by Cubans when it comes to leaving the the country.

However, several requirements of the new law rise as obstacles to the possible flood of emigrants. One is the subsection F of Article 23, under which the passport will not be obtained without “the authorization established under rules designed to preserve the skilled workforce.” Marianela, a doctor in a provincial hospital, shared her misgivings. “They say they are going to let Public Health personnel travel, but no one has spoken to us about it clearly. So we have to find out on Monday.” According to this kidney specialist, “If they let me out I would go to Ecuador with a friend who opened a clinic, where they would surely will pay me better than here.”

Similar distrust is shown by the Cuban opposition. Paragraph H of the same article leaves open the possibility of denial of a passport “for other reasons of public interest.” That brief line of text could include a political filter to prevent critics of the system from attending conferences and international events. A practice that has been followed for years and that makes the act of travel a perk obtained by those who are politically correct.

Nowhere in Decree-Law No. 302 is the act of entering and leaving Cuba spoken of as an inherent right of every citizen born on the Island. The human rights activist Elizardo Sanchez predicts that “a discriminatory policy with people who are not in favor of the government” will be maintained.

All these hopes and fears will be cleared or confirmed in a the coming days. Meanwhile, the countdown for the Migratory Reform Law goes through its final moments and in thousands of houses packed suitcases are ready.