The most serious offense a citizen in Cuba can commit is to want their country to be free and democratic, but even worse is speaking out against the criminal dictatorship that has governed us for 53 years. And in my case, the catalog of “crimes” that calligraphically crowned writing with “a certain” tilt and drawing the letters of a very suspicious size, if anyone still had any doubts, are those that are now taking me to one of Castro’s concentration camp if someone does not stop this barbarism.

The sentence of five years in prison for alleged crimes of housebreaking and injury, was anticipated in my case by an agent of State Security when I was severely beaten and then arrested along with other colleagues who were demanding the release of Antonio Rodiles at Aguilera police station, in the Lawton neighborhood on November 8 last year.

Agent Camilo, in his “infinite benevolence,” asked if I wasn’t satisfied with the five years in prison that they were already going to throw at me because of the alleged “common” case.

The court didn’t sentence me: I was condemned by State Security for opening a blog and being a government opponent.

A low-level “secret” agent, who’s nothing more than a thug from the slums, knew my sentence before the Court pronounced it. Does anyone in their right mind call that Justice?

In a country whose government was kidnapped five decades ago by a bunch of shameless and corrupt criminals who call themselves “Communists” and who share everything within the dynasty as if it were a satrapy, no one can think for a second that Justice exists there. What exists is “Castro justice,” i.e. the power of the state and, in service to the same, regulating and administering punishments and vengeance as decided on by the political power under the exclusive mandate of the tyrant Castro II.

On that occasion I was released after a video made it out of Cuba showing the operation against me, along with a photo of the shirt I was wearing, which together became irrefutable evidence that the Cuban political police violently repressed me. With this proof circulating all over the world they couldn’t continue to keep me caged. 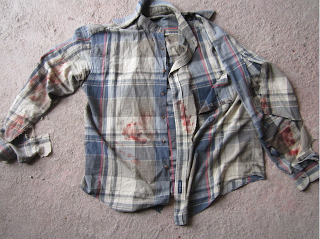 After being released and pending the sentence the appeal of the which is now in process, the harassment and persecution of me by State Security did not cease. The same agent Camilo who they entrusted to spy on me, pursue me and harass me. On December 15th I finally managed to get proof it was immortalized here. In these shots agent Camilo in the green car is driving himself and making a threatening gesture: The white car is the one accompanying agent Camilo on the “mission.” The white car accompanies Camilo on his mission to follow me.

With the evidence presented here, I want to state that if something happens to me, if I have a traffic “accident” or die of a “strange virus” or in any other strange circumstance, it will be a murder ordered by dictator Raul Castro who wants me out of the picture at any cost.