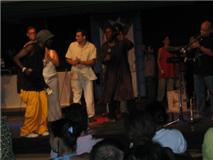 There’s a discrepancy between the sign board and program schedule at the Casa Gaia, located in Teniente Rey, between Águila and Cuba Streets in the historic quarter of Havana. That’s where art and thought now come together, but the sign board at the entrance announces the staging of Flechas del Ángel del Olvido (The Angel of Oblivion’s Arrows), scheduled to run Friday through Sunday until 29 November, under the direction of Esther Cardoso Villanueva, the director of the center.

Maybe it’s hard to take down the sign board. Perhaps the play continues to be on the sign board with sporadic interruptions and new options for patrons. Maybe it’s a strategy to avoid chaos on the premise, the top floor of which holds hundreds of people.

I myself am happy, since from Friday, July 23, to Sunday, July 25, I was invited by phone to the series of activities that the “dialogue among friends” disseminates under the title Estado de Sats (The State of Sats), which signifies “being attentive, awake and conscious of real transformation” in order to expand “open exchange and diversity as principal resources.”

There were three days of open discussions and lectures. Cuba and the future as the central theme. There were visual arts presentations, conferences, audiovisual projections, and concerts. A large crowd, in spite of the outdated sign board.

A collective exhibit of visual arts was launched on Friday at 8:00pm in the Vivarta Studio-theater, located in the Plaza de Carlos III shopping mall, under the title Recargable (Rechargable), with works by 15 young artists, one from Spain and another from Taiwan. The works alone are worthy of appreciation and deserve exhaustive commentary.

From the cinema, on Saturday at 8:00pm, Sats screened the documentary Memorias del Desarrollo (Memories of Development) by Miguel Coyula, who, through analysis and manipulation of images conveys the alienation of the individual and reflects upon how art reflects reality. The film was described by Sundance Film Festival as a “subliminal and cinematic collage that forges new cinematographic dimensions by way of multiple expository levels that intercept one another in a sort of picaresque saga about desire and decadence.”

The open discussions, conferences and presentations regarding cultural projects merit a special mention. On Friday morning Prof. Carlos Simón Forcade presented “Imagination and Growth within the Cuban Social Project”; following him was Antonio Correa Iglesias, PhD, and undergrad Ana María Socarrás Piñón with the topics, “Epistemology, Cognitive Sciences and Neural Networks: towards a Plural Zone in the Building of Knowledge” and “Contemporary Cuban Art or The 70s Generation?: Alternative Projects vs. the Visual Arts in Offcial Media”. In the evening, the AISHA Company project was held, as was the Art and Society Open Discussion with writer Víctor Fowler as moderator, and performances by Raudel Eskuadrón Patriótico, Luis Eligio Pérez, Maylin Machado, and Glenda Salazar.

On Saturday morning Dr. Antonio G. Rodiles presented “Complexity and Society”, while Carmelo Mesa-Lago by way of video projection, dealt with “The Economy of Cuba at the Crossroads: External and Internal Crisis”. In the evening, the “Raise the Voices” project and the Economy and Society open discussions occurred, with Hiram Hernández, Jorge Calaforra, Ramón García, and the quoted A.G. Rodiles.

On Sunday morning, the engineer Jorge Calaforra explained the “Cuban and Global Perspective for 2030” and Dr. Alexis Jardines presented “Cuba: Premodernity and Thinktanks”, referring to Western liberal democracies, ethical schisms in the national project, and factors such as the island’s intellectual potential and a thesis on the hollowness of “capitalism” and “socialism” as concepts. The evening session belonged to the “OMNI-FREE TRADE ZONE” and an open discussion about “Futures and Visions of Cuba”, lead by Castor Álvarez, Dimitri Prieto, Gabriel Calahorra, and Romina Ruiz.

The Casa Gaia sessions on Art and Thought culminated on Sunday night with the “A Good Thing Jam Session”, described by organizers as a “spectacle of textures and fragments as vehicles of national history and identity”, with rotating, projected images and rhythmic counterpoint music (jazz, hip-hop), all falling somewhere along the spectrum of blunt emotionalism (Raudel Eskuadrón Patriótico) and sensible civility (trova and danceable elements).