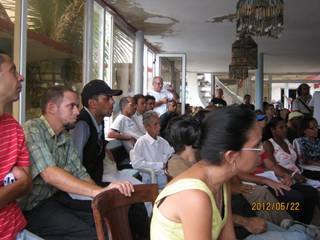 A few days ago, between June 21-23, the Click Festival was held, a completely independent event without ties to any government institution, whose principal content was to learn about and debate the technology used on the Internet. At the same time, technology displaced the political although, undoubtedly, the fact of holding the event itself confers on it a political character.

Everyone interested in the subject was invited to participate freely, both independents as well as “organics-governmentals,” although the latter, of course, did not make an appearance, perhaps by their own decision (they would have been within their rights to attend), or because indications from superiors suggested they not ask for trouble. suggested they not ask for trouble.

Among the many participants there were surely undercover agents (which is normal), to report about what was happening. If their report was objective the interesting presentations would appear in them, from both national for foreign guests, who updated and expanded our technological knowledge, and showed us how to make the best use of existing methods, as well as the wide-ranging debates that broke the bounds of the exterior embargo as well as in the interior blockade, which the majority of Cubans are subject to.

There was also a Children’s Festival, where the children who attended (whose parents were not afraid to bring them) enjoyed using the various technologies at their disposal, without slogans or statements for or against anyone on their screens, as well as the existence a piñata, balloons, candy and gifts.

What happened in these three days, had nothing to do with the hysterical, threatening and provocative editorial on a government website that — and it couldn’t have been otherwise — stated that it was a festival sponsored and funded by the CIA, the FBI, and the United States Interest Section in Cuba; I think it was only for lack of space that they didn’t include the Israeli MOSSAD, the former Soviet KGB, the former German STASI, and the British M-5 as well as other agencies of destabilizing objectives, not to mention counter-revolutionaries, two little words essential to official language. 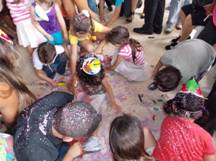 Continuing the manipulative escalation, yesterday the newspaper Granma reported on its front page that more than 100,000 people had attended a Cuban information festival, held in 600 Young Cuban Computer and Electronics Clubs. Undoubtedly, this ghost festival was farfetched and the 600 clubs doubtful, because it’s public knowledge that most of them have obsolete equipment, much of it damaged and out of service, and that they don’t have an Internet connection.

As if that weren’t enough, on page 5 there was an article about the millions of dollars that come from the United States to fund subversion in Cuba, repeating the same accusations against so-called cyber-dissidents and independent journalists.

It is noteworthy that the site, like others, was invited to participate, in an attempt to dialog, something that has always been a constant and that will continue to be practices, but they responded with the editorial cited. With these cavemen, who don’t know if they act out of radicalism or opportunism, who see conspiracies everywhere, the dialog necessary to resolve our problems and restore the unity of the nation seems practically impossible. I think that not all who write on these government sites share such intolerant opinions and that sooner or later they will discover the truth.

In short, the Click Festival, despite the gloomy predictions of some pessimists, the distortions about its true objectives from government spokespeople, the pressures and absurd attacks, was a complete success, and we participants learned a little more about technology, as well as widened the circle of our relationships with people with different viewpoints (a single vision is not enough), showing our mutual respect. What matters is that it was a Festival that ended happily, without crafting accords, signing agreements, or making declaration and this, in our country, is a lot.