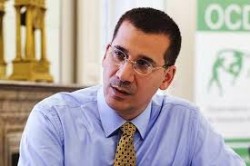 My name is Antonio Enrique González-Rodiles Fernández, Cuban citizen, resident of Ave 1ra. Number 4606 in the municipality of Playa, Havana. I studied physics at the University of Havana and later earned the titles of PhD Candidate in Physics and Masters in Mathematics from the National Autonomous University of Mexico and Florida State University, respectively. After 12 years living outside my country, I decided to return with the idea of being part of a process of change that will help us out of the disastrous situation in which we live.

In the summer of 2010, as a result of these concerns and with a group of friends, artists, intellectuals, activists, Estado de SATS was developed, a civic and cultural project that proposes through art and thought a public space for free debate of ideas and views about our nation.

The project has been carried out in my own home for three years, given the impossibility and refusal of the authorities to accommodate it in a public space or institution. Since its inception, dramatic police operations around my house, accompanied by beatings and arbitrary arrests against the attendees, have been a constant.

My family and I have received multiple threats and pressure including my being beaten by several State Security agents and detained this November for 19 days for the supposed crime of resistance. The authors of this violation continue to commit the same abuse with impunity.

Last week two of the tires on my car were punctured and a chemical liquid with a terrible stench was poured on the seats, as stated in Complaint number 66804 filed on November 26 at the 5th Station of the People’s Revolutionary Police (PNR) in the municipality of Playa.

Just two days ago urine was thrown on the front seats and, to all of this, is added the warnings that we have been sent of possible acts of repudiation to block an event we are going to hold on December 10 and 11, celebrating the 65th anniversary of the Universal Declaration of Human Rights, as part of a campaign asking for the ratification and implementation of the UN Covenants.

This event will have the same characteristics as all those we have developed previously, where a plurality of opinions and full respect for others have been our premises.
The situation we are living in is unsustainable, after 54 years of running the country on whims, violations and abuse, the result screams before our eyes. Every individual who dares to publicly express their disagreements is destined to be treated in a degrading and humiliating way with no possibility of appeal to any authority.

The deplorable acts of repudiation, managed through groups of vigilantes, all the abuses of power and the legal violations committed, keep Cuban citizens in a state of total defenselessness. The great irresponsibility and excessive ambition of those who now govern will lead our nation to an even greater debacle.

With this I mean not only to emphasize the complex situation in which we live, but to make clear my total commitment to the construction of a nation based on respect for the fundamental rights and freedoms of all Cubans. It is impossible to remain indifferent before a power that systematically ignores the dignity of its citizens and its own laws, with total impunity. A power that orders its representatives to act as common criminals.

Those who have the reins of power in their hands also carry the major responsibility for the course of coming events. It is impossible to remain indifferent to the violations and abuse.