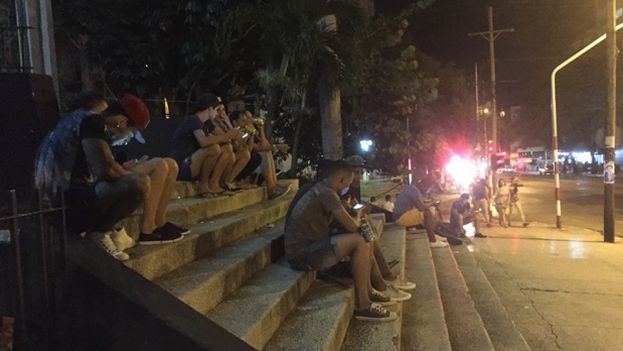 14ymedio, Eliecer Avila, Havana, 7 August 2015 — It’s seven in the evening and at home we’re hurrying to eat early. We decided to try to the WiFi connection on the capital’s La Rampa, a stretch of arterial which extends from the Coppelia ice cream stand to the Malecon. The preparations are the same as for going to the theater or a movie. With the difference that now we have to bring equipment bigger than a telephone, to be able to type with ease and take better advantage of the time.

Bus 174 with its new route favors us this time and before eight-thirty we’re entering the area. We are immediately struck by the number of people gathering on the sidewalks and on every corner, as we walk down the few blocks that make up what we might call the “hot stretch.”

As we brought our computers, we are impatiently looking for a little gap where we can squeeze in, but it’s impossible. Every stone, step, or piece of wall is occupied. Even the sidewalk itself is covered with people sitting and the almendrones – fixed route taxis – pass a few inches from feet with no one noticing.

The public is of all ages, although the predominance of teenagers is remarkable, in many cases a little impatient with their older family members, as they try to teach them to connect and navigate the web. Probably this nice gesture by the kids for their parents and grandparents happened in the same way all over the world 20 years ago, when mass access to the internet started, but that process started inside homes and later in public spaces, generally free.

On not finding any adequate space, we decide to try the Habana Libre Hotel, and we realize there is a little space in the outside corridor on the second floor. We hurry to sit on the floor, machines on our knees and enter the access passwords to see what happens.

Instantly, several boys ask us if we can do them the favor of allowing them to access the phone company’s portal through our PCs to recharge their accounts, because from certain types of phones it’s not easy to enter the site. We help some of them out and then go on-line ourselves.

We manage to enter and for a few minutes we experience this feeling of freedom that is the sense of a modern and civilized existence, where you feel yourself a part of something very big, infinite… It is like breathing the air of the outside world and flying through it to the point where you want to stop and contemplate the beauty and the tragedy in which we live. When we start to feel pains in our legs, aches in our backs and the irritation of the ambient noise, a half-hoarse voice wakes me up, “You can’t be here gentlemen, you have to go down to the world, let’s go.” It was one of the hotel guards, who constantly pass to “clear the area.”

With great difficulty we manage to gather ourselves, computers in hand, headphones on. With dozens of users on the stairs, we can barely see to descend to start a new search for a space. We find a ledge in front of the Ministry of Public Health and along with other internauts climb aboard again. This time our hands are moving faster because we have lost several golden minutes. We no more than alert a couple of friends to chat on Facebook when another guard comes along and repeats the same phrase. We stand up and head toward the Malecon, to see if we can find better luck.

On the way, there is no shortage of offers for access cards at three CUC, one more than the State phone company ETECSA charges, a commission that puts it in your hand at the right time and the right place, which is something ETECSA does not do. At the top of O Street, we see something inconsistent with a rational scheme and the logic of business. While the street is full of people trying to get comfortable to surf and the heat is tremendous, several State-run places that serve as restaurants and cafes with tables and chairs are completely empty. We ask other friends who have spent days in the hustle and bustle of the WiFi and they tell us they don’t allow people to connect there.

To those who have been lucky enough travel out of Cuba, this is especially shocking and uncomfortable, because we are aware of the volume of refreshments, snacks, beer and all the rest people might consume while checking their email or working on the web. In fact, the majority of the notable food establishments in any country in the world have free WiFi as a way to attract customers.

In the case of Cuba, the national food service functions more under the logic of corruption than the logic of business, because its false profitability has never depended on satisfying the customer, but rather on managing the inputs to feed a chain of interests that would merit another article.

The truth is that there is no place anywhere along La Rampa to sit decently and consume an overpriced hour of internet. Or that is, there are places, but you can’t use them. Getting up again, I see to my right a spacious plaza facing the ICRT building. I imagine it full of tables and comfortable benches, with elegant and discreet service that harmonizes with the peace necessary to make productive use of the web. But it’s just a mirage: the space is part of the park belonging to the provincial committee of the Cuban Communist Party.

As I walk I notice another important detail, which is the darkness, already chronic, of 23rd Street in general and of the stretch of it called La Rampa in particular. This condition has long been conducive to other activities that now coexist and intermix with people using the WiFi. The result is an interaction that could be the perfect opportunity for some malefactors to easily snatch from someone’s hands a phone, tablet or laptop, because usually those surfing the web are concentrating too hard on their device to take the time to perceive the danger all around them. There has already been some incident, despite the permanent police presence.

Returning to the Cuba Pavilion, home of the Hermanos Saiz Association, I draw the team together again and sit on the stairs, filling a space just abandoned by a girl who, after turning off her tablet, continued laughing on her own. What news did she get? There I finally managed to get the 30 minutes remaining to me and discover with pleasure that at certain moments even videos work, and I can also chat with several guys from Somos+, who were also waiting to see me at this time. I show them from this side of La Rampa, the people, the cars, and no end of laughing, of questions and wonder. It is like magic, we are connected and we experience it intensely until the time runs out and once again we are isolated and distant.

Despite everything, the WiFi passes the test of the first month with the joy of its existence, serving mainly as an appetizer to unleash a much greater hunger for connectivity and freedom.