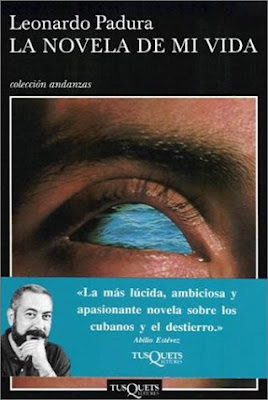 The Mantilla neighborhood exhibits a rare blend of a Havana suburb with a rural village. Its park, its church, its streets that foreign tourists rarely see, and even its famous writer. This last is Leonardo Padura, born in Havana in 1955, a journalist and author of numerous novels. Despite his international recognition and his possession of Spanish nationality, Padura has preferred to live in the same town on the Island where he was born, which has been the scene of so many of his stories.

The name of this universal Cuban is associated with detective stories, but his work also includes journalism and screenplays. A baseball fanatic, incisive in his opinions and of a proven nobility, on the even of his sixth decade he is an unusual man. His “rarity” lies fundamentally in having been able to sustain a critical vision of his country, an unvarnished description of the national sphere, without sacrificing the ability to be recognized by the official sectors. The praise comes to him from every direction of the polarized ideological spectrum of the Island, which is a true miracle of letters and of words.

Padura commands the force of talent. He has been received with respect, even by those in the Cuban Writers and Artists Union who observe him with resentment for his books that feature the detective Mario Conde. In the hard years of the Special Period his novels took a deep look at a reality that others preferred to whitewash.

His literary honesty, his tenacity, and also a good dose of luck, allowed him to reach th dream cherished by every Cuban writer: to be published in other parts of the world. Publishers ranging from the University of Guadalajara toTusquets in Barcelona, have helped him to position himself as an acclaimed novelist. This international recognition has also prevented the local censorship from simply making him invisible, and instead they try to accept him, although reluctantly.

The “writer of Mantilla,” as many call him, has the rare privilege of seeing his novels photocopied and circulated as pirated editions among his compatriots. This insatiable appetite for his pages is also due to the small runs the local presses have made of his most popular titles. If we were to measure the success of an author by the number of times someone makes an illegal copy of his work, then Padura would earn the highest score of any living Cuban.

If 2011 was a year full of accolades for the author of Past Perfect (Tusquets, 1991) and The Novel of my Life (Tusquets, 2002), it now ends confirming Padura as the great Cuban novelist of today. In 2012 he has continued to build on the favorable track record left by his book The Man Who Loved Dogs (Tusquets 2009), which deals with the life of Ramon Mercader, Leon Trotsky’s murderer. In November, he was also celebratd with an Author’s Week in which Havana’s Casa de las Americas presented a collection of his stories and essays under the title A Man and an Island.

Currently working on the book Heretics, which he has defined as “three novels which have a tenuous and invisible thread.” The movie 7 Days in Havana (French-Spanish co-production, 2012), which he collaborated by writing the script from one of his stories, has given us a lot to talk about by showing a city if interwoven hardness and sensuality.

Leonardo Padura is now the face of Cuban literature inside the island and we are tremendously lucky that this is so.