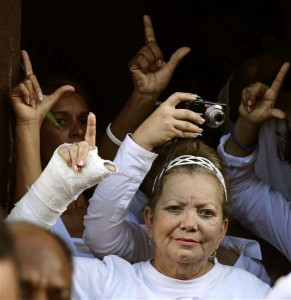 Right now Wednesday, the 28th of September is coming to my mind, when I spoke to her daughter to coordinate an interview with Laura. She was feeling badly already, her daughter told me that she’d taken a little lime and was laying down for a while in bed. Some days later, her state of health got a lot worse. The news left me astonished.

Without doubt, the effects of the verbal violence and the blows of the 24th of September were just a few of the causes.

Bad times are approaching for Raúl Castro. It pains me to think that the enemy hordes who, that day, were already shouting “to the machete, they are small” or “ready, aim, fire,” comforted them. What a sad role! I wonder if from this moment forward their consciences will remain calm.

Laura Pollán was a third age woman who stuck her neck out along with her integrity to demonstrate her truths.

If Orlando Zapata was a motor that pushed the opposition to protest shirtless, Laura had a great convincing power. Her doubtless merit was going out in the street and yelling for the freedom for herself and her people. May God bless her!