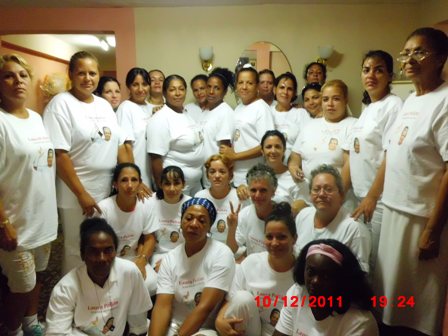 The Laura Pollan Ladies in White movement held its Literary Tea and celebrated December 10 as International Day of Human Rights under two acts of repudiation organized by government authorities on December 9 and 10, in front of its headquarters on Neptune between Hospital and Aramburu streets, Centro Habana municipality.

More than two dozen activists with representations from different parts of the island were able to evade the political police and shelter for two days at the headquarters of the Laura Pollan Ladies in White Movement, to celebrate the Literary Tea for the International Day of Human Rights suffering acts of repudiation organized by state security who days earlier called in the UJC militants and the PCC to repudiate the group of women.

Laura Maria Labrada Pollan, Secretary of the National Executive Committee of the CID, confirmed that on the ninth day she had paid tribute to her mother Laura Inés Pollán Toledo, founder and chief spokesperson who died last October 14, with the display of clothing worn by Laura in their Sunday marches, which defined her life in battle clothes, the projection of the song dedicated to his mother by the exiled Cuban author Amaury Gutierrez, and a twenty minute protest banging of pots and pans.

“On the 10th we suffered another act of repudiation, in which they shouted that we were prostitutes of the empire, worms, traitors, mercenaries, among other obscenities, etc., and prevented us from taking to the streets,” she said. “There is one report of many women who were arrested and others who were ordered on home arrest and remained for two days in police custody,” she concluded.