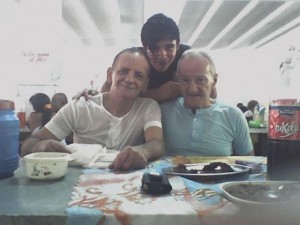 HAVANA, Cuba , August, www.cubanet.org.- Undocumented and with the stigma of “terrorist,” Jesús Rojas Pineda barely survives in Jagüey Grande, Matanzas; after having been released on October 19, 2012, from Kilo 9 Prison.

His cause is the same one that Armando Sosa Fortuny was tried for: The 15 October 1994 disembarking together for Caibarién, more outraged than organized, as you will see below.

Before enlisting in the group of seven men who landed that night, Rojas Pineda  had been a fisherman in his native Caibarién until on July 12, 1994 he took to the sea in a plastic boat and rowed, coming ashore in Florida

“We were well received as rafters, they helped us right away,” says Rojas.

He also got a job: “I started making pots to catch lobster.”

But, according to his own words, on 12 August of that same year, in a funeral home on Calle 8, the bodies of two Cuban rafters were laid out. “That day 600 boat people arrived on U.S. shores.”

He says that right then a protest was organized against the Cuban government, holding it responsible for the death of the rafters. “The protest lasted 24 days… on October 10 a group of seven of us agreed to return to Cuba with some weapons but without chemicals substances nor explosives.”

The rest of the story is well known. They tried to cross the newly opened causeway that connects Cayo Santa Maria with Caibarién, to the Escambray. On the road a car appeared in which were traveling, among others, the Communist party secretary of the province of Villa Clara , who was killed in an accidental shooting by the gun of Humberto Real Suarez, another of the expeditionaries.

“At the trial, the prosecutor himself admitted that the shooting was accidental, since the weapon Humberto was carrying Humberto was modern and if he had pulled the trigger intentionally it would have released a flurry of shots instead of one, as it happened,” recalls Rojas Pineda.

Nevertheless, the sentences were for between 20 and 30 years in prison; the firing squad Humberto Real Suarez standing out; he had testified at the trial, “I did not come to kill innocents, but to fight against the dictatorship.”

Several of the seven men had been badly wounded by their captors. Fortuny in the head and shoulder; Real Suarez in the wrist; Rojas Pineda  by the impact of 82 glass particles after the car windows were blown out; and Diaz Bouza, handcuffed on the ground, was shot by an AK that struck him in the jaw and arm.

The sentence for Rojas Pineda was 20 years, even though at the trial it was recognized by the prosecution that his gun was never fired.

After the trial, they were transferred to maximum severity prisons.

To describe the Cuban prison inside, Rojas Pineda says: ” Monstrous, in ever respect.”

Kilo 8 Prison in Camaguey , known as “I lost the key,” was one of the first places they went.

“There I was in the cell No. 50, maximum security. They didn’t let you out in the sun, and denied us medical care claiming that we were terrorists.”

In that prison, Rojas Pineda was nicknamed the Matador because the officials wouldn’t stop mistreating him. “They imposed extra punishments on you, like reducing your water and taking away the foods sent by your family.”

At some point he was in need of an operation of hemorrhoids and for him to see a surgeon he had to stage a hunger strike that lasted 18 days. “They refused not only to let me be seen by the doctor, but also the painkillers.”

When he was 18 days into the hunger strike, a visit was scheduled from the MININT Commission from Havana to inspect the prison.

Rojas Pineda took his blood-filled rags and threw them into the corridor. Only then was he taken to hospital where he underwent surgery the next day. But back in the cell they cut off his water supply. “I had to get up and go to get some water for the toilet, recently operated on.”

“One night, a boy started calling after the order for silence: Let me go to cell of the Matador, he always gives me something to eat,” Rojas Pineda continues his story.

“A guard pulled him out and along with three others beat him nearly to death. The prisoners began shouting, ‘Abuse! Abuse!’ and started hitting the bars. The second night, they called in special troops, that even had flamethrowers, because the prison called them saying it was a revolt against the government. The prisoners were expressed themselves, saying, ‘This is a problem of the daily outrages and abuse.’

“They retired the troops and in a few days a commission of officials from Havana brought 50 releases, 50 paroles and 50 minimum conditions,” he adds.

Parole was denied on many occasions. Finally, on October 19, 2012 he was released “for completing the sentence.” In all, he spent 18 years in captivity.

Until the last day, shared the same task and the same small space with Armando Sosa Fortuny, whom he calls “brother.”

After being released, an opportunity came to visit Fortuny bringing him food, but “they didn’t accept the crate nor the bag, because they said it wasn’t visiting day.” Every afternoon, Rojas Pineda goes to the phone and waits for the call from his “brother.”

Currently, he suffers from hypertension, circulatory problems and an advanced degree of deafness, in addition to all wear and tear from so many years as a political prisoner.

Rojas Pineda’s family is the opinion of this man does not want to be in Cuba any more. At first he could not close any doors in the house.

Rojas Pineda was in the midst of the formalities for U.S. residency when he decided to return to Cub . The mailing address in Miami is the one on the document they gave him when he left the prison, which is not an identity card, but a kind of letter of freedom.

But he can not emigrate legally to the United States, primarily because his U.S. documentation was held by the Cuban authorities after his arrest.

What the Cuban Office of Immigration and Nationality is proposing is to being the paperwork for “repatriation,” to be able to obtain an Identity Card. But Rojas Pineda doesn’t feel well in the land where he was born, that didn’t sufficiently raise its voice for his cause, and that didn’t save him and his family their 18 years of suffering when he was a political prisoner.

When this reporter comments that his story could be read by the Cuban public in exile, he expresses his desire to send a big hug to his brothers and the request that, “If anyone knows of a way in which I can obtain a duplicate of the documentation retained by the Cuban authorities since the day of our arrest, if it might be left in some file in Florida, let me know. I want to spend my last days in peace,” he concludes.