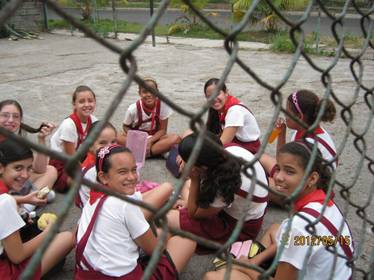 The 2013-2014 school year begun, dragging into this new stage all the deficiencies and errors accumulated during these past 30 years.

After swallowing the bitter pill of acquiring uniforms, sending them to be taken in or out, finding another from the son of a friend he no longer needs, in order to have two sets to alternate, finding the books and something to cover them with, paying for notebooks with CUC (hard currency), because the ones from the school are not enough, pencils, backpack, socks, sneakers or shoes (a parent’s worst nightmare), everything an investment in hard cash, the task with the biggest responsibility, because of what it implies, is to successfully enroll children in a school (one of those that corresponds to the area of residence), which has enough teachers, since the deficit of educators is such that many classrooms don’t have a teacher assigned to them.

Each day there are fewer young people who aspire to major in pedagogy, among other reasons, because the salaries paid are insufficient, and they don’t enjoy the minimal conditions needed or the social acknowledgment of exercising one’s profession correctly, as well as the charged ideology that being a teacher entails.

Many young people, who were taken with the profession, end up leaving the classroom to go to work in the tourism or restaurant sector, to find something more attractive and better paid. So then they call those students who didn’t succeed in passing the exam for this major, and who prepared only three months for the teaching profession, as well as those put up as substitute teachers in televised classrooms, provoking the sleepiness and boredom of students and teachers, without noticing the errors of education that has occurred through the years.

Now the government complains of the tremendous academic deficit of our educators and pupils, which prevents the latter from being accepted in the universities, which, in turn, have seen a decrease in their academic level, due to the politics and partisan ideology that has always been a priority in teaching. At this very moment, there is a case being made that this school year be dedicated to “The Five Heroes.” For this, of course, they didn’t consult the teachers or the students. Again, politics over teaching.

Another aspect to take into account is that it is principally the parents and the teachers who in the days before the classes begin, must, with their own resources, clean the classrooms and school yards and on occasion, even provide the paint with which to repair these into decency. Some parents, who can count on certain economic resources, even buy electric fans to ensure that the environment is more pleasant in their children’s classrooms. All of this is common practice. Once again the citizens resolve the problems that belong to the State, who publicly makes note of its “victorious triumph” and in the case of education, one of the “triumphant flags” raised is socialism, which in these moments is totally worn down and frayed.

In addition, there is constant talk of recovering formal education, good manners and social mores, and I wonder: who were the principals responsible for these disappeared and destroyed values, instilling in adolescents the promiscuity reigning in forced scholarships and schools in the countryside, where the good manners transmitted from the family are retracted, considered petty bourgeois behavior?

Who could have forgotten that it was the teachers themselves who, in many schools in the eighties, supplied sticks and stones to the students, under guidance from the authorities, to repress anyone who intended to leave the country?

Now, who should we blame for the improper conduct, vulgarity and marginality developed in our society where the bad examples have gone hand in hand with economic and social decline for half a century, where the fear induced has led us to be involuntarily complicit with our silence.