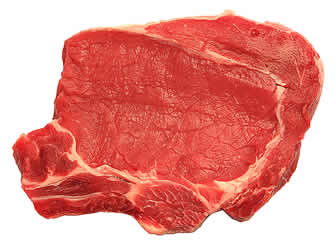 Havana, Cuba: For decades Cubans have seem themselves constrained with it comes to putting beef on the table. A type of meet that causes stage fright in those who have never imagined themselves on a stage.

To date, no one knows why they are doing what the popular voice continues to pass from mouth to mouth: the final goodbye to red meat. The truth is that after the triumph of the ill-fated Revolution of 1959, this meat could only be enjoyed onthe tables of those in the highest economic echelons, or at the very least, who are members of the clan in power in the Cuban State.

It was our apostle José Martí who said in one of his poems … children are born to be happy … but maybe this can only be in Cuba until an age of somewhere between seven and nine years, after which they are stripped of dairy products and beef. Products only delivered back to them in old age or after acquiring any chronic disease and a medical prescription.

According to what the butchers themselves have commented, beef can now be purchased only on the black market or in the network that works on hard currency, the CUC; as of now those who had received this product get only poultry (chicken).

A situation that has led everyone to complaining and even quoting that the Bolivian President Evo Morales said in a television appearance where he claimed that  it is the chicken, carrier of female cells, that alter the system in men, causing them to become homosexual.

I don’t know what will happen if this comment becomes reality. I think and have talked to some colleagues about the unfair crime of Theft and Slaughter of Cattle, Receiving Their Meat and The Sale of It, which is considered an Attack on the Cuban Economy, a crime that has put thousands of innocent people behind bars. And that in a country that does not practice the Hindu religion where the cow becomes a sacred animal, something inexplicable.

What is laughable is that the animal whose meat is called Red Gold, is only forbidden for the lower class and for families who rely entirely on their basic wages. While a group that criticizes us may continue to acquire meat thanks to remittances received from family and friends from abroad. Now there are those who enjoy impunity, and knowing that an entire people is denied this product they will continue to put it on their tables along with other delicacies that only they can enjoy.

As comments have corroborated, over the past two months they have been giving us only chicken, instead of beef. A fact that is already making many think that if this is truly Cubans’ last farewell to beef, from fear many don’t even mention its name but rather call it, “Tilapia from the Pasture.”