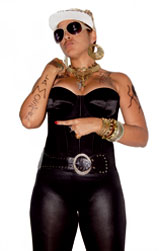 Cuban television is not characterized by the quality of its domestic programming so I review the movie schedule to see if anything interests me. The only ones I follow are the pirated ones: Grey’s Anatomy, Suits, and Dirty Sexy Money; this latter despite its late night schedule.

But sometimes, by chance, by pure chance, I stumble on programs produced by  Cuban TV, which produces little, bad and late, and luckily fills in with the canned. In a fatal chance I’ve seen some scenes of a horrible thing called Santa Maria of I Don’t-Know-What that shows on the soap opera hour; but the other day I endured with a stoicism worthy of a better cause a humor (?!) program made by women. They were competing, there was a really condescending jury, raising their cards with their ratings.

Bad taste, vulgarity, lack of grace, lack of originality; and an example of all of the above, the host of the program. In the Federation of Cuban Women and the Cuban Writers and Artists Union (UNEAC), institutions that concern themselves interchangeably with female integrity and raising cultural values, should not have seen More Women (with the “more” [plus] sign that I don’t find on the keyboard), this monstrosity of “more” for which I can not find enough adjectives on the keyboard.